Islamic rule in India: A dark era of plunder and barbarism against Hindus 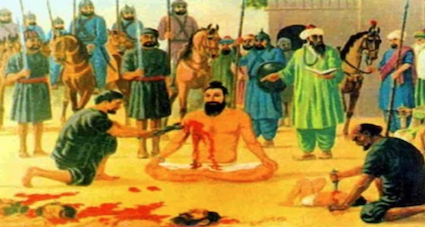 The following is the ‘chronology’ of the Islamic rule in India, a dark era of invasions, barbarism, plunders and cultural disintegration.

The Islamic invasion of India started in 711AD, with the army of Muhammad Bin Qasim capturing Sindh and Multan. Jizya (a form of tax to be paid by kafirs or non-believers to the Islamic state) was imposed on and forceful conversions of non-Muslims to the Islamic fold also happened. Temples were ransacked, looted and desecration of Idols took place during the days of invasion and it continued to happen in every wave of invasions.

The second massive invasion came in the form of Mahmud of Ghazni who was amazed hearing about the richness of India and wanted to take away all the wealth of her. In 1026, Ghazni’s army plundered Somnath Temple in Gujarat, broke the Jyotirlinga and ransacked the magnificent temple complex.

Then came Muhammad Ghori, who sealed the fate of India with his victory over Prithviraj Chauhan in the 2nd battle of Tarain. Ghori, who had lost the 1st battle of Tarain violated the laws of war by sending his troops before sunrise. By this time, another Islamic bigot Muhammad bin Bakhtiyar Khalji made severe inroads to East India and the universities of Nalanda and Vikramashila were destroyed. Libraries of these universities were burnt. Also, Buddhist monks and Brahmins were massacred in large numbers by his army.

The territory that Muhammad Ghori gained in India through fraudulent means got transferred to his Turkish slave Qutb-ud-Din Aibak after the death of his master in 1206. Hence, Mamluk or Slave dynasty was established with Lahore as its capital. Qutb Minar is often portrayed as a cultural symbol of Delhi. Its construction was started in AD 1193 (three more stories to the tower were later added by Iltutmish) by Aibak to celebrate the Muslim victory over Hindustan. Adjacent to Qutb Minar is Quwwat-ul-Islam mosque which was built after demolishing 27 temples. The ruins of these temples were used for the construction of the Masjid. The name ‘Quwwat-ul-Islam’ itself translates as the might of Islam. Many of the Hindu and Jaina symbols can still be found on the pillars of this Masjid. Religious violence reached a new zenith during the period of Khalji dynasty (1290-1320).

Their massive military campaigns which covered the entire Indian subcontinent resulted in massive loot, destruction of temples, capturing of Hindus as concubines and forced conversions. Islamic scholars in the court of Alauddin Khalji were instrumental in the persecution of Hindus as they regarded idol worshipping as anti-Islam. Three south Indian kingdoms of Devagiri, Madhurai and Warangal were ransacked by Khalji’s commander Malik Kafur. Thousands were butchered and many more were captured as slaves. Halebid and Madhura Meenakshi temples were also destroyed by the Islamic army. A large amount of wealth, extracted from these kingdoms was carried away to Delhi.

Hindus were persecuted on massive levels during the regime of Firoz Shah Tughlaq which made eminent historian R.C Majumdar call Firoz Tughlaq the “biggest bigot of his age”. In his autobiography Futuh-e-Firozshahi, Firoz Tughlaq had proudly stated that he took measures to convert infidels (Hindus) to Islam and Hindu holy texts were publicly burnt. He destroyed the Puri Jagannath temple while on an expedition to Jajnagar in 1360. Jwalamukhi temple of Kangra was destroyed during the expedition to Nagarkot. Firoz Tughlaq on multiple occasions slaughtered Brahmins for preaching religion and refusing to convert to Islam.

In 1398, Timur invaded Delhi and one lakh Hindus who were captured as slaves were killed brutally by his army. Hindus were systematically targeted in the entire process. Around the same period, Sikandar Shah Miri became the sultan of Kashmir- the land whose culture was fostered with Shaivism and Buddhism. Sikandar ransacked hundreds of temples and destroyed a large number of idols which earned him the title of but-shikan or idol-breaker. The iconic Sun temple at Martant (Anantnag) was razed down by him and thousands of Hindus were forcefully converted to Islam. He mercilessly killed many Hindus who refused to convert. Sharia was imposed over all his subjects and thousands fled Kashmir due to religious persecution. Sikandar’s hate for Hindus was theologically supported by the Sufi ‘saint’ Mir Mohammad Hamadani. The entire present-day notion of considering Sufism as moderate can be contested by citing this example.

The second last ruler of Delhi sultanate, Sikandar Lodhi also carried forward the policy of Islamic hate towards Kafirs. Both swords and monetary benefits were used for converting Hindus. Things were no different after the establishment of Mughal rule in Hindustan. The rule of Mughals (Babur) started with the demolition of Ram Mandir at Ayodhya (regarded as Ram Janmastan by Hindus) and the construction of Babri Masjid above the ruins of Ram Mandir. Hindus were forced to pay the Jizya tax and pilgrimage tax was also imposed. Akbar’s period can be regarded as less draconian as compared to his predecessors and successors. Hindu temples were demolished during the reign of Jehangir during his expedition to Mewar. The fifth Guru of Sikhs, Guru Arjan Dev was tortured and Killed at the order of Jahangir. Shah Jahan practised Islam more vigorously than his ancestors. Hindus were forcefully converted and stipends were given to the recent converts. Many of the Hindu temples were destroyed in the holy city of Prayag and Benaras. There are even accusations of Taj Mahal being built after the demolition of a Mandir named Tejo Mahalaya. War-captives were converted to Islam and culprits were let off free once they chose Islam.

Islamic intolerance crossed all heights during the reign of Aurangazeb. This religious bigot was on a mission to strip off non-Muslims of their cultural identities. Interestingly, he even attacked the Shia states of Bijapur and Golconda. The ultimate motto of Aurangazeb was to convert India from Dar-ul-Harb (nation of Kafirs) to Dar-ul-Islam (Muslim nation) and become the undisputed ruler of the Islamic world. Jizya was re-imposed on Hindus and even the Hindu soldiers were asked to pay this tax. Major Hindu temples like Kashi Viswanath temple, Somnath temple and Keshavdev (Krishna Janmabhumi) temple at Mathura were demolished on his orders.

Gyanvyapi Mosque was constructed after demolishing Viswanath temple. A statue of Nandi facing towards the East can still be found inside the ‘mosque’. Keshavdev temple was demolished in 1670 and Shahi Eidgah was built on that site. It is said that in Mewar itself Aurangazeb destroyed 240 temples and further pulled down many temples during his Deccan campaign. Hindu merchants were asked to pay double the customs fees as compared to their Muslim counterparts. The five-decade long rule of Aurangazeb can be regarded as a period of hate, loot, plunder and savagery. Later the Mughal Empire declined, got decimated after the battle of Plassey and became a mere symbol of power. In further south, Tipu was the messenger of cruelty and Jihad. Tipu inherited the Mysore kingdom from his father Hyder Ali. Thousands and lakhs of Hindus were converted to Islam in Coorg (Karnataka) and Malabar in Kerala. Temples were destroyed and idols were broken. The agendas of Tipu were the propagation of Islam and plundering riches.

Noted Historian William Dalrymple in a recent interview stated that the Marxist historians presented a ‘rose-tinted vision’ of Hindu-Muslim unity running through the whole of the Delhi Sultanate right through the Mughals. Religious motives of Islamic rulers were usually whitewashed as political. It is a known fact that in Islam, politics and religion are one at the same. While going through the medieval textbooks written by Marxist historians it could be found out that the persecution of Hindus is omitted for ‘academic and political’ reasons. The above-written chronology is just the tip of an iceberg. If we go in detail regarding the bigotry of Islamic rulers, volumes of books can be produced on the same. Owaisi’s love for those ‘800 years of darkness’ is very much connected to the political fortunes of MIM. The depth of Hindu civilisation can only be understood from the simple fact that the tyranny of nine centuries couldn’t destroy either Hinduism or Hindustan. No matter how much time and energy neo-Islamists spend for the disintegration of this great nation, the superiority of Hindu culture will never allow Hindustan to collapse.

(This piece is republished from The Organiser with gratitude).