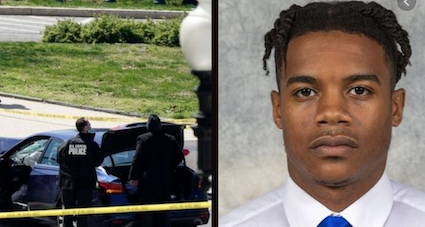 Noah Green, the suspect who crashed a car into a US Capitol barrier, was a follower of the Nation of Islam and its leader, Lousi Farrakhan, as per social media accounts belonging to him.

Several news outlets, citing court documents, reported that Green was slated to legally change his name on Friday to Noah Zaeem Muhammad. He did not show up for the hearing.

Green was shot and killed by U.S. Capitol Police after the incident, officials said. One officer died and one was hurt, said Capitol Police in a statement.

“The suspect rammed his car into two of our officers and then hit the north barricade barrier,” Acting Capitol Police Chief Yoganana Pittman said. “At such time the suspect exited the vehicle with a knife in hand. Our officers then engaged that suspect. He did not respond to verbal commands.”

The fallen officer was identified as William “Billy” Evans by Capitol Police.

Homeland Security Secretary Alejandro Mayorkas wrote Friday that “there is still much to be determined about” the attack.

The U.S. Capitol complex was placed on lockdown after Friday’s shooting, and staffers were told they could not enter or exit buildings. Video showed Guard troops mobilizing near the area of the crash.

Video posted online showed a dark colored sedan crashed against a vehicle barrier and a police K-9 dog inspecting the vehicle. Law enforcement and paramedics could be seen caring for at least one unidentified individual.