J and K eliminate 4 JeM, LeT terrorists; one of them was a Pakistani 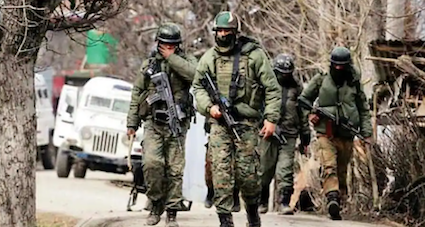 The Jammu and Kashmir security forces eliminated two terrorists of Pakistan-backed Jaish-e-Mohammed (JeM) and 2 LeT terrorists. One of the JeM terrorist eliminated is a Pakistani national.

The encounters happened in Ganderbal and Handwara in a join operation by the forces in 4-5 locations on Friday night.

As per Kashmir IG Police Vijay Kumar, the encounters are over in Handwara and Pulwama and a terrorist has been captured alive.

Speaking to ANI, IGP Vijay Kumar said, “We launched 4 operations last night. First one was launched in Pulwama. Zahid Wani was killed and we caught one Jaish terrorist alive. We have been very successful this year. Jaish’s back is broken in South Kashmir.”

He also spoke about how locals are influenced by terrorists. “Locals are also instigated by terrorists. I appeal to locals to get their children back to mainstream. 70 percent of youth who join these terrorists get killed within 2-3 months,” he added.

In an earlier development, a terrorist from Manjkot of Pakistan occupied Kashmir was killed in a brief shootout in the Hazratbal area while two other terrorists managed to flee.

“A Pakistani terrorist identified as Manzoor @ Haider @Hamzah, affiliated with proscribed terror outfit LeT (TRF) was killed in a brief shootout in Hazratbal area.  Haider along with two other terrorists (who managed to escape from the spot) were on a mission to snatch weapons from the police personnel guarding the Hazratbal shrine,” said Inspector General of Police, Kashmir Zone, Vijay Kumar.

However, the timely action of the small police party who were tracking them led to the elimination of Haider, who is “a resident of Manjkot of PoK and was active in Srinagar city for the last 6 months”, according to IGP Vijay Kumar.