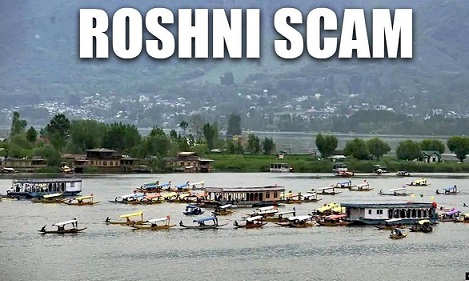 The full extent of loot of government land in Jammu and Kashmir under the garb of Roshni scheme is becoming clear with every passing day now. This is happening as several Deputy Commissioners have released advertisements worth lakhs of rupees in newspaper giving names of the beneficiaries. One list of 583 beneficiaries of the scheme pertaining to Rajouri has been published in one newspaper. It mentions that hundreds of them never paid a penny into the government treasury and yet had the land transferred in their names. It means that the revenue officials carried out mutations in the records giving land to encroachers at zero cost. A column mentions about the status of fees paid but barely a few dozens paid a pittance.

Incidentally, the J&K State Land (Vesting of Ownership to the Occupants) Act, 2001, popularly known as Roshni, was meant to transfer lands to encroachers for fees. This fees was to be determined by revenue officials but waving away the fees was not within their powers.

Some lists being published these days in newspapers also have a column where details regarding the beneficiaries are given in terms of their association with various political parties. The column says “Whether the applicant/beneficiary is government official or officer, bureaucrat, legislator, ex legislator, ex minister.”

The Rajouri list mentions the name of Babu Ram s/o (read son of) Dewan Chand at District President of the Congress as among the beneficiaries. Other beneficiaries include names of several policemen, forest guards, orderlies, dozens of teachers, among others.

It needs to be mentioned here that the publication of list of beneficiaries of the largesse of Roshni scam is being done due to orders of the Jammu and Kashmir High Court. These details may also be submitting in the court soon and will have to be published on website of the revenue department.

Another list of beneficiaries in Samba district gives the names of 381 beneficiaries who got land under this scheme. Usually, the rate of fees fixed was kept absymbally low, and a ridiculously low amount of Rs 100 per kanal (5,400 square foot) had been fixed. One case stands out as that of Tilo Ram s/o Bua Ditta of Giar gained rights over 56 kanals of land for free.

In Samba, at Birpur Sehdev Singh s/o Kanwal Singh got land rights of 20 kanals for Rs 90 lakh. This may be 10 times lesser than the prevailing market rate. At another location in Birpur, four sons of a person named Sant Singh were given rights over 5 kanals 8 marlas for only Rs 540!

At Purmandal in the same district, Jagdish Raj and Kuldeep got 26 kanals 11 marlas for a princely sum of Rs 2,655 on 29.10.2011. At Nanga, Daljeet Singh was given 17 kanals for Rs 1,700. In Vijaypur tehsil, 507 kanals of government land was handed over to private individuals for only Rs 34.54 lakh. A kanal of land at Vijaypur along Jammu-Pathankot now costs Rs 2 to 3 crore.

The justification for the scheme given by Farooq Abdullah of National Conference was that he wanted to raise Rs 25,000 crore for hydel power projects. He was the mastermind behind selling the scheme to masses in erstwhile state of J&K which included Ladakh also till last year. Theoretically, if the land were alienated at prevalent circle rates when all rights were given to encroachers, it would have been possible to raise more than Rs 25,000 crore which were promised at the beginning of the scheme.

In 2001, the cut-off date for regularisation of land rights was set at 1990. Mufti Muhammad Sayeed, as Chief Minister of PDP-Cong coalition government in 2004, changed the date from 1990 to 2004. His successor Ghulam Nabi Azad of the Congress changed this date to 2007.

The scheme was scrapped by the then Governor of Jammu and Kashmir state, Mr S P Malik, in 2018, prospectively. However, the J&K High Court has now declared the scheme ultra vires ab initio.

It is widely believed that the supporters of the NC, the PDP and the Congress stand to lose vast chunks of land. The names of any BJP supporters or party leaders gaining from the Roshni scheme has not come to the fore so far. As such, it cannot be accused of any systematic loot of government land.

Thousands of kanals of land, both revenue and forests, have been encroached by land mafia otherwise also. The government has not lost this land due to Roshni scheme and officials are making efforts to retrieve it. The absence of a political government in J&K has come as a blessing as there can almost be zero interference in the eviction process in the coming days.

The Financial Action Task Force (FATF) is unlikely to remove Pakistan from greylist for next few months, according to German media house DW. A...