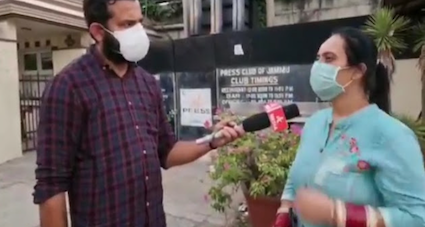 After the forced interfaith marriage of  two Sikh girls triggered local protests in Jammu and Kashmir last week, another woman Nikita Saini has now revealed how she was tricked into religious conversion by her husband.

In an exclusive interview, Nikita revealed that she was trapped by her husband Arfin Shah and his family into marrying him when they got to know of her previously failed marriage.

Arfin Shah, who hails from Udhampur, Jammu and Kashmir, was her classmate from school days and offered to marry her when he got to know about her marital status.

However, Saini revealed that they never made any conversion request before marriage but when she went to Uttar Pradesh for her nikah, her name was changed to Nafeeza from Nikita. She was then told that it was a mere formality.

However, things took an ugly turn when Arfin started pressurizing her to marry his father as she could not establish a physical relationship with him.

Saini revealed that when she protested the Arfin with his brothers made plans to sell her by deciding who will keep her in a pre-decided amount.  Beyond that, a lot of mental torture was also put on Saini which she even threatened suicide.

Seeking justice from the government, Nikita has even written a letter addressed to Jammu and Kashmir governor Manoj Sinha stating the entire incident.

Meanwhile, a delegation of Sikhs also met Union Minister of State for Home G Kishan Reddy in Delhi yesterday and submitted a memorandum about the alleged forced conversion and wedding of Sikh girls in Kashmir.