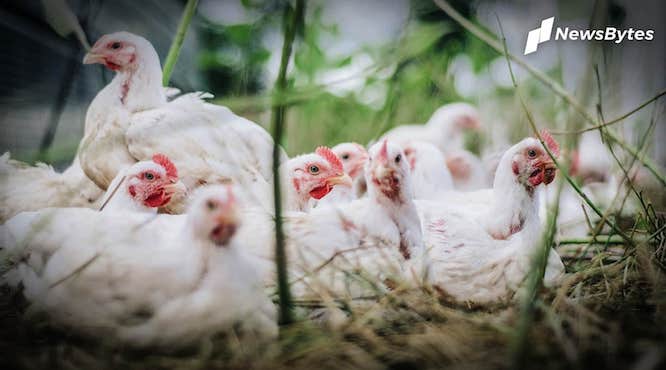 The Jammu and Kashmir government has banned thr import of all poultry products with immediately effect. An order to this effect was issued by senior IAS officer Naveen Choudhary late on Thursday evening. The order has been issued in view of the bird flu scare.

The ban is likely to hit poultry farms in Punjab and Haryana in the coming days. Most of the poultry products, including live broiler chicken, eggs and frozen meat is transported to the Kashmir valley by road. The demand for these products usually goes up during winters as there is little local production.

Another reason for a surge in demand in the Valley is that the Jammu-Srinagar highway has remained closed for almost a week now. Thr bird flu scare and consequent ban on import of poultry will disrupt the supply chain. This can lead to the poultry prices rising in the Kashmir region.

On Thursday, over 250 crows were found dead at different locations in Kathua, Udhampur and Rajouri districts. So far, only dead crows have been found at all these locations and no reports of any other avian deaths have been received.

In the neighbouring Himachal Pradesh, hundreds of dead poultry birds were found dumped on Kalka-Shimla highway on Thursday. Over 300 dead chicken were found in this stretch on Wednesday also. Teams of experts have been constituted in Himachal to keep track of developments.

These teams are investigating the bird flu among migratory birds which has caused deaths of hundreds of migratory birds in Pong dam. The dam is located on Beas river which flows into Punjab from Himachal and onwards to Pakistan.

According to IFS officer Suresh Kumar Gupta, extreme cold could also lead to unnatural deaths of crows. Some samples have been taken and sent to a Jalandhar laboratory for tests. These tests alone can determine the cause of death of the crows, he added.

Gharana wetland, a large bird sanctuary near International Border (IB) in R S Pura sector, plays host to a variety of migratory birds during winters. The sanctuary attracts thousands of bar headed geese, among other species. Samples of bird droppings have been collected from the sanctuary also, according to officials.

Manda zoo located on extreme north side of Jammu city also plays host to many bird species. Veterinary department is monitoring that location also to keep track of any illness or unnatural deaths of birds.

Crows have been found dead in far-off Gujarat, in Mehsana district famous for milk production, and in a district of Karnataka bordering Kerala. In fact, over 70,000 poultry birds were culled in Alpuzza and Kottayam districts of Kerala till Thursday evening.