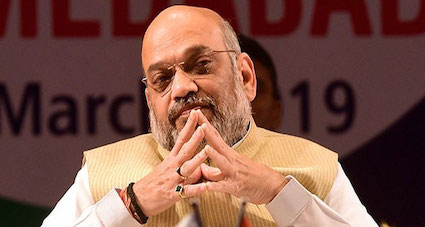 Union home minister Amit Shah, presently in West Bengal, has reasserted that Citizenship Amendment Act (CAA) would be implemented not just in the State but in other parts of the country soon.

“This is their second or third generation but they haven’t got citizenship. I have assured that after forming government in Bengal—we have already brought in the CAA law—it will be implemented in all places, including Bengal.”

This was the most pointed admission by Shah, speaking to Republic TV’s political editor Aishwarya Kapoor, about the state of Hindu refugees from Bangladesh who had crossed over and remained without citizenship after decades. He mentioned people of Naryanpur in the South 24 Parganas districts which are teeming with such refugees.

Shah is in Bengal for two days, flagging off the fifth Paroibortan Yatra from Kakdwip today, 200km away from Kolkata. He was delighted that the home he visited for lunch had been constructed under the Pradhan Mantri Aawas Yojna.

The CAA is to provide Indian citizenship to six minority communities—Hindus,Sikhs, Buddhists, Jains, Parsis and Christians—from Afghanistan, Bangladesh and Pakistan who all came before December 31, 2014. Further, the mandatory residence period for naturalised citizenship for these communities would be reduced to 5 years.

CAA is a bone of contention, not just in West Bengal but also in Assam where bodies such as All Assam Students’ Union (AASU) is concerned on citizenship. To assuage them, the Centre has exempted a major part of the North East from the ambit of the Act. Though the CAA was passed in December 2019, it has not yet been implemented for two reasons: One, anti-CAA protests were widespread and then Covid-19 pandemic struck the nation. Two, its rules are yet to be framed.

Farm Laws: Undemocratic to repeal it

Shah also took on the contentious farm laws and said repealing the three agrarian laws would be “undemocratic.” Yet he said the Centre is always ready to lend an ear to protesting farmers’ concerns.

“The farmers who find some problems in the laws should talk on issues. They should tell what their grievance is. I don’t see it’s democratic to demand a repeal of the laws. The government is willing to discuss with an open mind. We are in touch with farmers from across the country. They say that we are going to benefit them,” said Shah.

“The slogan of Jai Shree Ram is not a religious slogan anymore for people of Bengal. You (Mamata) did appeasement politics for 10 years, it has become the slogan of people’s anger against you. Will you have to go to court to offer Durga Puja? Teachers and children will be beaten on Vasant Panchami for offering Saraswati puja? Why? Mamata Banerjee will have to answer this. The more she hates the slogan, the louder it will grow.”

There are several instances when Mamata Banerjee has thrown a fit on the chants of Jai Shri Ram, even from people on street. Recently, when the slogan was raised on Netaji Subhas Chandra Bose’s 125th birth anniversary, she refused to address the crowd in the presence of prime minister Narendra Modi.

Why West Bengal is denied benefit of Centre’s schemes

The home minister was aghast that the ruling Trinamool Congress has obstructed the welfare schemes of the Centre and didn’t allow the people of the State to benefit from them.

“Only 25 to 30 out of 115 schemes of the Centre, the benefits of which can be directly received by the beneficiaries, are there. No other schemes have been allowed. She doesn’t allow percolation of other schemes. We bring schemes for fishermen, she objects, we bring schemes for farmers she stops them. For health benefits we bring card up to 5 lakhs, she stops them. The entire efforts are towards corruption and vote bank politics,” Amit Shah said.

Shah assured that workers would get paid as per the 7th pay commission if BJP was to come to power. He also promised a 33% reservation for women in state jobs. He promised a “Sonar Bangla” and assured all Centre government schemes would be implemented in Bengal including CAA and Farm Laws.

“When we connect with people in a natural manner, we come to know of their problems. This will help us find solutions to their problems when elected to power. For e.g when I toured Bengal, we came to know that Bengal govt workers have not been able to avail 7th pay commission. We have mentioned in our manifesto that all state government workers will get salaries according to the 7th pay commission. There are no shortcuts to governance.”

Shah dared Trinamool Congress “goons” to try and scare the people of West Bengal—it won’t work this time during the assembly elections in two months time.

“On the day of voting, not a single goon of TMC will have the guts to go on the booth and harass or stop the people from voting. We have requested the election commission to deploy paramilitary forces and maintain a secure and violent-free environment even in villages,” declared Shah.

“Do not fear. While voting, not a single goon of TMC will be able to do any harm to any of my sister while voting…people have become aware. BJP has reached booth-level. We will ensure that the people’s mandate what is in the EVM, will be respected.”

BJP is buoyed by the results of the 2019 General Elections when it wrested 18 of the 42 parliamentary seats. It still has a long way to go in assembly polls though where Trinamool Congress has 222 out of 294 seats. It has been heartening for BJP though to see the mass exodus from Trinamool Congress ranks in recent weeks, including from inner circle of Mamata Banerjee such as Dinesh Trivedi and Suvendu Adhikari.