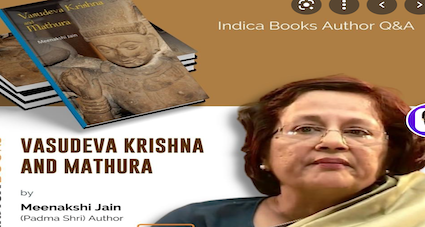 A civil suit was filed before the court of civil judge, senior division Mathura on behalf of child deity, Bhagwan Shri Krishna Virajman on Friday seeking removal of the Shahi Idgah Masjid which stands adjacent to the Sri Krishna temple at Mathura, and claiming ownership of the entire 13.37 acres land which is believed to be the birthplace of Lord Krishna.

While the case is under litigation,  noted political scientist, scholar, and historian, Dr. Meenakshi Jain has come up with her latest book, Vasudeva Krishna, and Mathura that claims to provide the archeological evidence of the presence of a shrine and worship of Vasudev.

Jain, who is the author of several important books that have debunked the myths peddled by India’s well-entrenched Leftist historians like Romila Thapar and Satish Chandra, among others, presents Vasudeva Krishna and Mathura with a similar trajectory to the one of her earlier work- Rama and Ayodhya, linking the Hindu deities with the places they are associated with by devotees.

The book talks about the historical, archeological, and literary importance of Krishna Janmabhoomi-Mathura and offers fascinating information on the Islamic iconoclasm and the destruction of Katra Keshavadeva Temple in Mathura.

The history of the Katra Keshavadeva Temple is complex and was subjected to repeated devastation, beginning with that by Mahmud Ghaznavi in 1071 CE. Raja Veer Singh Deva Bundela of Orchha had built a grand temple of Lord Shri Krishna which the fanatic Mughal ruler Aurangzeb had plundered and built a mosque there. However, after the Marathas came to power in 1770, the temple was restored, but the Idgah mosque remained in its place.

The book points out that the entire land of Katra Keshavadeva Temple was purchased by Raja Patni Mal of Banares during the auction by the East India Company in 1815, debunking the present claims of the Committee of Management of Trust Masjid Idgah that had taken over the land.

Many documents pertaining to events at Katra Keshavadeva after 1815 are being presented to the general readers perhaps for the first time through her book.

She further puts the light on the bizarre agreement of Shree Krishna Janamsthan Sewa Sangh in 1968 with the Idgah group to transfer some of the land of Katra Keshavadeva to the latter.

Bhagwan Shri Krishna Virajman has also demanded the cancellation of the settlement between the Sewa Sangh and the Idgah Trust.

Despite the dominance of the Left-Liberal lobby in the Indian media and academia, Meenakshi Jain revives not only the antiquity of image worship in India through her books but also presents the unbiased assessment of Indian history through her deep scholarship.