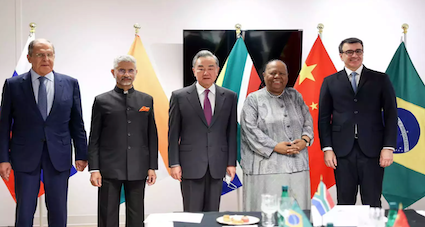 After taking a veiled jibe at China for blocking blacklisting of Pakistan-based terrorists on many occasions, External Affairs Minister S Jaishankar met his Chinese counterpart Wang Yi at BRICS ministerial meeting in New York on Thursday.

Brazil, Russia, India, China, and South Africa are the members of the BRICS.

Before attending the BRICS Summit, Jaishankar addressed the 15-nation UN Security Council and categorically stated that when it comes to sanctioning world’s most dreaded terrorists, impunity is being facilitated in UNSC.

In his address, Jaishankar also took a jibe at China at UNSC, and added that politics should not prevent sanctioning of terrorists. “If egregious attacks committed in broad daylight are left unpunished, this Council must reflect on the signals we are sending on impunity. There must be consistency if we are to ensure credibility,” he added.

The external affairs minister’s comments came days after China put a hold on a proposal moved at the United Nations by the US to designate Lashkar-e-Taiba terrorist Sajid Mir as a global terrorist.

Notably, Mir is wanted for his involvement in the 26/11 Mumbai terrorist attacks.

In the past, China has used its Veto power in the United Nations to block or hold bids by India, US and other western countries to blacklist Pakistan-based terrorists under the Security Council’s sanctions regime.