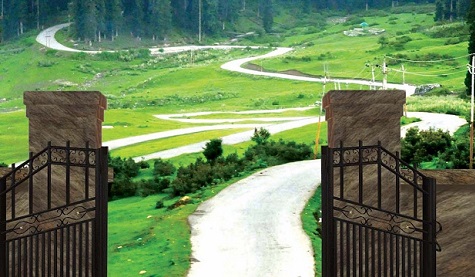 The Industry and Commerce department of Union Territory (UT) of Jammu and Kashmir has been given 25,000 kanals of land by the UT administration. Of this, 17,000 kanals has been given in the Jammu region and 8,000 kanals in Kashmir. This is a sort of “land bank” created for use in case of someone evincing an interest in setting up an industry in J&K.

This comprises mainly of non-agriculture, non-forest barren identified government land, patches of which are available in different areas.

Before 2018, the department had established 49 Industrial Estates all over J&K and used approximately used 32,000 kanals. The first Industrial Estate was set up in the outskirts of the Jammu city at Digiana in 1960s. Kathua, Samba and Jammu today have most industries in the Jammu region. Some industrial estates have also been set up in Kashmir. However, lack of railway transport and an unstable law and order situation in Kashmir often acts against any viable industries being set up there.

The last industrial policy for J&K was framed in the year 2016 when Mehbooba Mufti headed a PDP-BJP coalition government. This policy envisaged creation of land bank of 20,000 kanals over a decade. However, as stated earlier, the UT administration has already identified 25,000 kanals for the industrial development.

No land has as yet been allocated to any would-be entrepreneurs so far out of this vast “land bank”. During the last two years, 434 units have been set up and 1,371 kanals allotted for this purpose. The land is allotted under relevant laws and rules on lease basis to the industrial units.

The constitutional changes initiated by the Central government in August 5, 2019, have not gone down well with certain Valley-based political leaders. They allege that the land in the UT will now become available to all Indians, and this will lead to demographic changes. They also alleged that the people in Jammu region would be worst sufferers as “outsiders” (Indians from outside J&K) would prefer to buy large chunks of land there.

Those in favour of scrapping of Article 35 A and restating of Article 370 argue that the whole UT will see unprecedented development in the coming years. These competing narratives dominate most discussions, whether in Jammu or in Kashmir.