Javed Akhtar wouldn’t like Kangana’s passport to be renewed 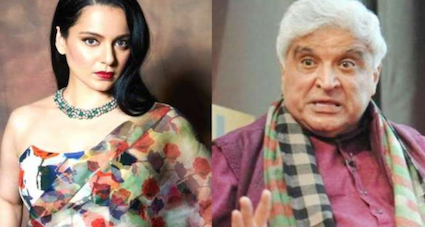 Controversial writer, poet and lyricist Javed Akhtar has moved an intervention application before the Bombay high court alleging that Kangana Ranaut had deliberately misled the court and got an assurance from the Passport Authority of India for expediting her passport renewal application.

He has claimed that Kangana deliberately gave a misleading statement in Bombay HC in order to obtain a favourable order to get her passport renewed.

In the plea, Javed Akhtar claimed that the response by Ranaut’s counsel was limited to criminal proceedings arising out of two FIRs and failed to mention about pending criminal defamation case against her filed by him. Hence Akhtar was required to be heard by HC, the petition argued.

According to Ranaut, her passport is due to expire in September, 2021. She approached the high court saying she needed to travel to Budapest (Hungary) this month for the shooting of her upcoming film for which she needed her passport renewed.

She had filed an interim application in the written petition seeking directions to the Regional Passport Authority, Mumbai, which was allegedly raising objections to issue a passport to her as she had FIRs against her.

During the hearing of that application last week, the actress’s lawyer, Rizwan Siddiquee, made a statement to the Court that there were no criminal cases pending against her in any Court arising out of two FIRs.

Following the submissions, the Bombay HC had disposed of the petition after the passport authority gave an assurance that it would decide on her application expeditiously.

Last year Javed Akhtar filed a criminal defamation case against Kangana Ranaut’s statements against him in an interview to a news channel. In the interview, she had alleged that some senior Bollywood members, including Javed Akhtar, were part of a ‘gang’ that worked against outsiders who tried to enter the industry.