Jeff Bezos vs Mukesh Ambani: The latter would be ‘bankrupt’ if Future Group goes 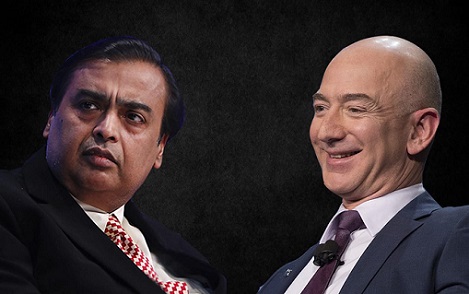 A clash of Titans of the business world, Amazon.com Inc. and Reliance Industries Ltd. is now on in the Delhi High Court. This is about the acquisition of Future Group’s assets by the latter and Amazon bid to stall that. The verdict may be delivered as early as in a couple of weeks.

Amazon is arguing that the stressed Future Group violated a contract by agreeing to sell to its rival Reliance owned by Mukesh Ambani. The court is examining whether the American retail giant had any firm legal basis for its arguments.

This has turned out to be a clash between two of the richest persons in the world, Jeff Bezos and Mukesh Ambani. At one level, an element of “foreign versus local” has also been thrown into this keen contest.

Harish Salve, representing Future Retail Ltd., argued in the court that Amazon was behaving “like the East India Company of the 21st century”. He said that Amazon’s stand is “either do business with me or you shut down”, adding that if the sale deed with Reliance is aborted, thousands of jobs will be lost. Salve also argued that this will lead to bankrupt for his client.

Salve also said during his arguments that “Amazon has no investment in Future Retail.” He further said that Reliance wanted to buy his client’s firm and asked rhetorically: I have to ask Big Brother in America? He asked whether it was right to allow an overseas firm (Amazon) to control an Indian company’s business dealings.

Former Attorney General of India Gopal Subramanian is representing Amazon in this case. He counterparts Salve’s arguments saying Amazon was “no Big Brother or East India Company”. Amazon had introduced Future Retail to a prospective Investor so that its financial distress could be eased. He also said that Amazon had invested over $6.5 billion in India, and helped create thousands of jobs.

A Singapore arbitration tribunal had earlier granted an emergency order putting brakes on the deal between Reliance and Future group. Salve said the Singapore order is not recognised by Indian law and also that the deal with Reliance is crucial to prevent the collapse of the Future Retail.

Last week, the antitrust regulator, the Competition Commission of India, had approved the Reliance-Future deal. Before that, Reliance had said that it didn’t want to delay the deal.