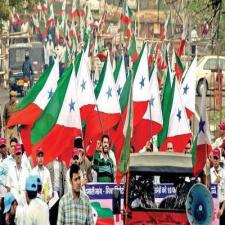 The Jharkhand government has slapped the radical Muslim outfit, the Popular Front of India (PFI) with a ban again this week for keeping links with Islamic State (IS) and being a threat to communal harmony in the state.

The ban with immediate effect, under the Criminal Law (Amendment) Act, 1908, makes it unlawful to be a member of the PFI, give donation or keep literature of its extremist policy or publish them.

The Jharkhand ban came in the wake of murder of one Ramalingam in Tamil Nadu who was killed for stopping attempts of conversion by Islamic preachers in a dalit colony in Thirubhuvanam earlier this month. PFI men are among those who have been arrested.

The Police FIR claims that the motive behind Ramalingam’s murder was to create fear among people who question Islam.

“They have also committed the crime to convey the message that whoever…speaks against Allah or Islam will be killed in a way similar to Jihad so that nobody else dares to talk about the religion or Allah,” reads the FIR.

The Jharkhand ban comes six months after the state’s high court had over-ruled an earlier ban of 2018 for a technical flaw of not publishing it in the gazette. The Jharkhand government claims that all proper formal care has been taken this time to outlaw PFI.

In its earlier ban, the Jharkhand state’s report had claimed that revenue from its media publications, backed by Saudi Arabia, and other modes of funding from overseas, also need to be checked.

The National Investigation Agency (NIA) for long has been on trail against the PFI and have prepared a hefty dossier against the outfit.

The NIA has mentioned the killing of RSS worker Rudresh in Bengaluru; the chopping of hand of Prof. T.J. Joseph at Idukki (Kerala) for setting a paper on Prophet Muhammed and the Kannur training camp where country-made bombs and swords were seized. PFI was planning terror attacks in South India, the NIA claimed.

The NIA claims that PFI trains its cadres with the clips of the Babri Masjid demolition and runs a parallel administration and judiciary in states. In July 2009, a declaration was passed in Malappuram in which the Muslim community was asked not to attend civil courts. PFI is accused of running an Islamic conversion centre.

PFI as an organisation dates back to 1993 when it was called the National Development Front, formed following the demolition of the Babri Masjid. It has often been accused of being associated with the banned Students Islamic Movement of India (SIMI). Most office-bearers of the PFI have been associated with SIMI in the past.

Jharkhand BJP leader Vinay Kumar has claimed that PFI has connection with the “PM assassination plot.”