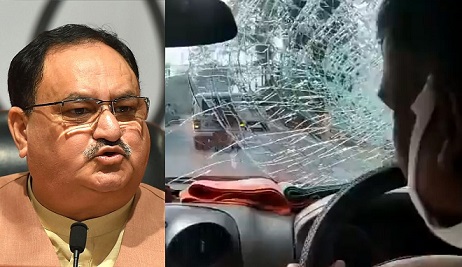 In a shocking incident, an attack was mounted on JP Nadda, president of the Bharatiya Janata Party (BJP), in West Bengal when his convoy was attacked with stones and bricks while it was on its way to Diamond Harbour in Kolkata on Thursday.

Several cars in the convoy, including the one of BJP national general secretary Kailash Vijayvargiya and West Bengal BJP chief Dilip Ghosh were badly damaged in the attack.

Minor injuries were also reported on about 10 BJP leaders, including Vijayvargiya and Mukul Roy.

“The scenes I saw while coming here are highlights of the anarchy prevailing under (Chief Minister) Mamata Banerjee in Bengal. We were able to reach here because of the blessings of Maa Durga. TMC workers left no stones unturned to stop or finish us. This is ‘goondaraj’. I had a bullet proof car. But almost all other cars were damaged,” said Nadda while speaking to  BJP workers in Diamond Harbour, which falls under the Lok Sabha constituency of TMC’s Abhishek Banerjee.

“There is no administration here. Administration has collapsed. Without central forces there is no way of moving in Bengal,” Nadda said “While I was coming, I saw ordinary people and how they are scared. Parivartan has already taken place in Bengal. People have turned their faces away from Mamata Banerjee.”

“Trinamool Congress workers sporting party flags and armed with lathis attacked our convoy at multiple places. Stones and bricks were hurled by TMC workers. Several cars have sustained damage. Police were mute spectators in some places and missing elsewhere,” alleged Ghosh. In defence, TMC MP Sougata Roy said: “It is not possible to cover every inch of the route with policemen. Spontaneous protests by the people may have happened in some places. That is what I saw.”

Bengal Governor Jagdeep Dhankhar expressed concerned over the “alarming reports of anarchy and lawlessness” and rued that such incidents took place despite his instructions to the Chief Secretary and Director General of Police.

Nadda is in West Bengal in an outreach campaign ahead of the assembly polls, due in six months.

In the letter to Amit Shah, Ghosh had also alleged that at the BJP’s party office in Hastings, “there was a mob of 200-plus with sticks, bamboos, etc. demonstrating by raising black flags”. “Some of them climbed the cars parked outside the office and raised slogans. Police dod not intervene to stop them and casually allowed them to come within a close perimeter of Naddaji’s vehicle,” he wrote.

Later, home minister Amit Shah, in a tweet, has come down strongly on this attack on Nadda. He says in his tweet that the state government would be answerable to its peaceful citizens in Bengal.