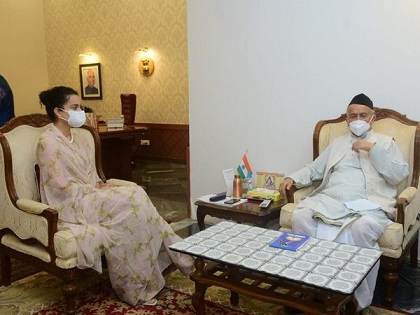 Kangana Ranaut met Governor Bhagat Singh Koshyari in Raj Bhavan in Mumbai and briefed him about the unjust treatment being meted out to her on Sunday.

“I met Governor Koshyari and told him about the unjust treatment I have received. I hope justice will be given to me so that the faith of all citizens including young girls, is restored in the system. I am fortunate that the Governor listened to me like a daughter,” she said to media persons.

This meeting has come as the tussle between Kangana and ruling Shiv Sena have gone from bad to worse.

Ranaut has received death threats and there were hate graffitis against her name after she had compared Mumbai to Pakistan Occupied Kashmir (POK).

It was followed by Sanjay Raut, chief spokesperson of Shiv Sena, calling him “Haramkhor ladki.” Later, the Brahunmumbai Municipal Corporation (BMC) demolished a part of her building in Bandra.