Kangana meets Yogi: Says one of India’s most loved leaders 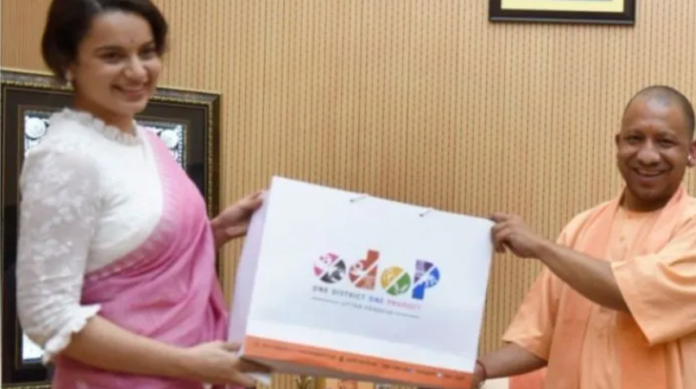 “We had a tapasavi Raja from Uttar Pradesh Shri Ram Chandra and now we have Yogi Adityanath…may your reign continue Maharaj ji,” gushed famous actress Kangana Ranaut as she met the chief minister in Lucknow on Friday.

Kanaga, in turn, was gifted with a silver coin by Yogi Adityanath which was used during the “Bhoomi Pujan” of Ram Mandir last August 5. The image was shared by the actress on her Instagram account.

Kanagana has also been appointed a brand ambassador of the state government’s flagship programme, “One District One Product” (ODOP) which seems to promote indigenous products like rice, black salt, zara zardozi that are native to districts of Uttar Pradesh.

Wrote Kangana about the chief minister: “He is exceptionally vibrant, genuine and motivating in person…what a pleasure and privilege to have an audience with this young, fiery and one of the most loved and popular leaders of this nation.”

Kangana, who is shooting for “Tejas” in the state, declared she is also making a new film titled “Aparajitha Ayodhya” on the ancient city and the Ram Janmabhoomi dispute. The script is written by KV Vijayendra Prasad, and the movie would be directed by her

The actress is currently shooting for her film ‘Tejas’ and is directed by Sarvesh Mewara. It is based on the landmark decision of the Indian Air Force (IAF) in 2016 to induct women in combat roles.