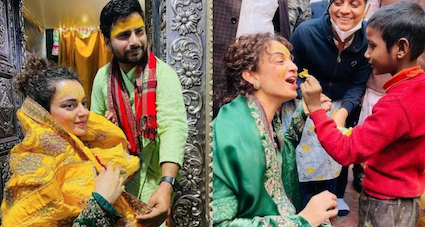 Sharing a series of images on her Instagram profile, Kangana said that she is a devotee of Krishna and has come to the Banke Bihari temple for the first time.

The ‘Queen’ actor posted a video of performing rituals at Gokul Dham, and added that it was the place where ‘Vasudev handed over baby Krishna to Nand baba.’  She also had darshan at Giriraj ji at Govardhan’s Dhanghati temple.

In another clip, she wrote while she was elated throughout her trip but expressed her displeasure about the huge armed forces and strict laws like border forces.

“It pains to see the huge armed forces and strict laws much like border forces … it’s not some India border it’s Krishna Janm Bhumi.”

Talking about the details of her trip, she mentioned the jail where Mata Devaki and Shri Vasudev Ji were kept and said that it was partially visible for the visitors. Further, she requested Uttar Pradesh chief minister Yogi Adityanath to make a visit to all other underground jails possible for devotees.

On asking questions by the media on political support, she said that she will support the party which will keep the feeling of nationalism for the country.

She was also questioned about the farmers on which she said that she has never apologized to the farmers and those people who are true patriots will never mind my words.