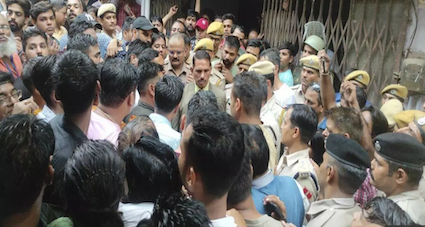 The two accused in the brutal murder of  Udaipur tailor Kanhaiya Lal were attacked by a large number of people outside a Jaipur court.

The two were surrounded by the angry mob while they were being escorted by police outside the premises of NIA court in Jaipur.

In a video, a mob of people and lawyers can be seen trying to attack the accused when they were being taken back in a police vehicle. Some also shouted slogans like “Pakistan Murdabad” and “Give Death Sentence To Kanhaiya’s Killers.”

Kanhaiya Lal was murdered on Tuesday in Udaipur city’s Dhan Mandi area by two men area who said that they are avenging an insult to Islam.

The accused, identified as Riaz Akhtari and Ghouse Mohammad, went to Kanhaiya Lal’s shop posing as customers and when he was taking the measurements, one of them attacked him with a cleaver. They later posted the video of the brutal murder on social media.

While Akhtari and Ghouse Mohammad were arrested hours after the murder, two more people, who were allegedly involved in the alleged plan to kill Kanhaiya Lal, were caught on Thursday night.

The National Investigative Agency (NIA) court remanded in 10-day police custody the four people. They were produced before the court amid tight security arrangements.

In their video clips, one of the accused said that they had beheaded the man and threatened Prime Minister Narendra Modi, saying their knife will get him as well.

The killing of the tailor triggered communal tension and sporadic incidents of violence in Rajasthan’s Udaipur, prompting authorities to ban large gatherings across the state and snapping mobile internet.