Karachi could be wiped out: The telltale signs are unmistakable 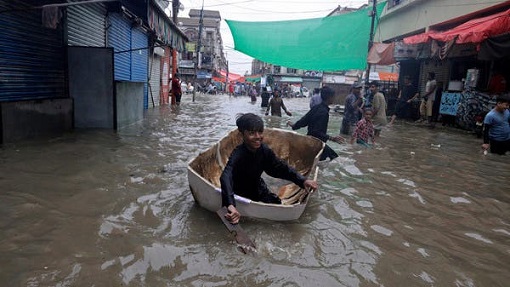 Pakistan’s financial capital Karachi could be wiped out of existence and unfortunately there is nothing the government or the world could do to stop it.

A city of 20 million people, Commercial capital which earns the nation more than half of its revenue, every year is decimated by irregular yet intense monsoons which are growing fierce and more fierce every next time around, says a New York Times report.

This year nine inches of monsoon rain fell on August 27 which is the highest in a single day. In the month itself, 19 inches of rain fell which is enough to drown any city, leave alone Karachi which has no drainage, no emergency system, no reliable health care.

As monsoon is retreating, the loss of life, property and resultant migration is being evaluated. Over 100 people are dead; goods worth 25 billion Pakistani rupee ($150 million) has been washed down the drain from markets and warehouses and the estimate suggests $449 million dollars of GDP was flushed for a week that Karachi stood still. We haven’t come to how much property or homes were destroyed or subsumed.

World Bank estimates that the GDP of Sindh (which has Karachi as its capital) loses 15 percent of its worth every year due to extreme weather conditions. Between 1998-2018, according to the Global Climate Risk Index, Pakistan has lost nearly 10,000 lives, $4 billion and seen a migration of 30 million people.

Pakistan is today the fifth most climate-vulnerable nation of the world. As glaciers in Hindu Kush, Himalayas and Karakoram in northern Pakistan are melting at a pace, these mountains could lose two-third of its ice-fields by 2100. The horror of landslides, flooding, dam burst, soil erosion could only be imagined. After glaciers are gone, drought and famine would step in.

The World Bank today reckons Karachi as one of the planet’s hottest spots in terms of climate change. Then you have a village in Sindh itself, by the name Jacobabad where temperatures in the summer rise up to 124 degrees Fahrenheit. It’s the hottest city in Asia, if not the world. And residents receive power outages more than the hours they receive it in a day.

In 1947, Pakistan ws 33 percent forest. Today, the tree cover is just 4 percent. The deforestation isn’t natural: the timber mafias have worked overtime, silting up waterways and defending the city, state and the nation undefended against floods and storms.