Karthik stumps Nasser Hussain in his inaugural stint behind mike 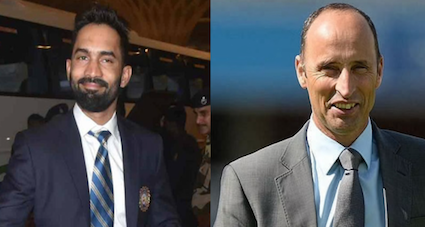 India cricketer Dinesh Karthik is one of the two Indian commentators in the final of the World Test Championship between India and New Zealand. While this was his first stint as a commentator, he made his presence felt on Day 1 of the match with his cheeky commentary.

Karthik kicked off his commentary alongside former England skipper Nasser Hussain and made everyone fan of his witty skills.

The incident started with Hussain discussing Indian opener Rohit Sharma’s tendency to knock some beautiful pull shots. He complimented the right-handed batsman’s ability to play the spinners equally well and said the approach by Rohit helps the team with the positive intent at the top.

“Rohit is a great puller of the short ball. Uses his feet well against spin. Shows positive intent,” said Hussain.

Responding to this, Karthik took a sly dig at his co-commentator and replied: “yes, exactly the opposite of you.”

The fans on Twitter didn’t waste much time and started hailing Karthik for his remarks during the mega clash.

One user praised Karthik for his insightful knowledge and said, “Dinesh Karthik will surely be the next big name in TV commentary. Rich cultured voice…great sense of humor. The best to come out of India in a long, long time. #INDvNZ #WTCFinal2021 #TestChampionship