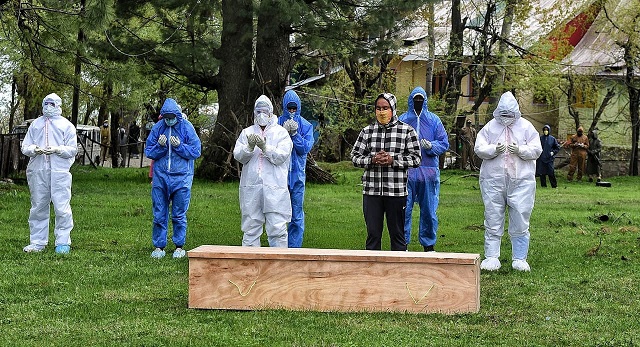 During the past fortnight, the number of cases, as also fatalities, due to Wuhan virus infections have risen sharply in Kashmir. There have been 244 deaths in J&K so far, of which 225 were recorded in Kashmir and 19 in the Jammu region.

On Sunday, eight more deaths were reported due to virus, according to official “Media Bulletin” released by the UT government.

Incidentally, till date, 13,899 cases have been recorded in the UT. Of these, 11,112 have been reported from Kashmir and 2,787 from Jammu. This means the number of cases in Kashmir is almost four times more than those recorded in Jammu. However, the number of fatal casualties there has been over 12 times.

A week earlier, between July 6 and 12, the total number of cases had risen by 2,084, of which 1,614 were recorded in Kashmir and 470 in Jammu. The sharp rise has sent alarm bells ringing and in a widely circulated video message, Lt Governor GC Murmu made a fervent appeal to people to observe preventive measures seriously.

Meanwhile, several Deputy Commissioners have imposed partial lockdowns and created containment zones in affected areas. A couple of DCs have decided to delegate powers to impose a fine of Rs 1,000 on those found guilty of not wearing facial masks in public areas.

An office-bearers of Doctors Association of Kashmir, Dr Nissar ul Hassan, blamed the confusion created by authorities for the sharp spike in fresh cases. He said the government was wrong in ordering opening of tourist spots like parks some days ago.

In a related development, Jammu DC Sushma Chauhan issued orders for weekend lockdowns from 6 pm on Friday to 6 am till Monday. The order comes into effect on July 24 evening.

It needs to be stated that cases of virus infection have been reported from all 20 districts of the UT. Of these, 16 districts have recorded fatalities and no deaths have occurred in four districts, namely Samba, Reasi, Kishtwar and Ramban, all in the Jammu region.