Kashmiri Pandits stayed away; Yet these polls are milestone in India’s history 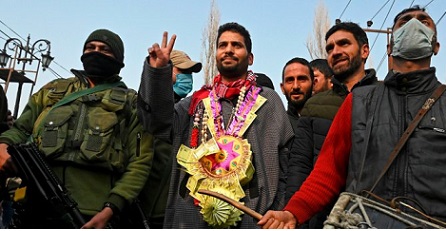 Analysts are busy giving their interpretations of the District Development Council (DDC) elections in which Bharatiya Janata Party (BJP) emerged as the single largest party. But history would remember this as a moment when in independent India, for the first time, the winners won’t take oath under the Jammu and Kashmir Constitution. Rather, they would be owing allegiance to the Indian Constitution.

Those taking vows would involve 74 from BJP, followed by 27 from National Conference of Abdullahs. Then there would be a disparate crowd of 49 independents, 27 from Mehbooba Mufti’s People’s Democratic Party (PDP) and lastly 26 from Congress which is forming a habit of coming last.

Omar Abdullah and Mehbooba Mufti, one reads on the morning after, are claiming that people of J & K have rejected the abrogation of Article 35 A and hollowing out of Article 370 which occurred on August 5, 2019. But truth to tell, as former information director KB Jandial has forwarded in a WhatsApp group, anti-370 votes accounted for 5.45 lakhs votes while those in favour of restoration of region’s “special status”, Gupkaris and others, have only 3.49 lakhs to show.

Besides BJP has also claimed three seats in the Kashmir Valley when those, running them down, used to wonder if it would ever have any credible show in the turbulent region. This is a historic moment, look at it any way.

What does it tell us about these elections?

One, it’s a real takeaway there was no boycott and candidates sought their votes from door-to-door like they do in other parts of the country. There is some justifiable claim on the part of Minister of State Anurag Thakur that people have opted for the nationalistic and not separatist narrative which could only mean well for the region, and by extension, India.

Two, the seven regional parties from Kashmir which came under the PAGD banner would have a real task to hold together whenever the assembly elections beckon. Those 90 seats would bring divisions to the fore as at stake would be power and the seat of chief ministership.

Three, Kashmiri Pandits had almost negligible participation in the elections. Some 52,141 of them in Jammu were eligible to vote in the elections but only 1,862 could bring themselves to the polling booths. Since the margin of victories in many segments in Kashmir was very low, they could have proved decisive had they cast their votes.

In Pulwama’s Dadsara, an independent defeated a NC candidates by only three votes. In another segments, victory margin of 7 and 11 votes came to notice. In Jammu too, the winner, a BJP candidate, prevailed by a mere 45 votes. In 16 seats, the winner had a margin of less than 100 votes. It’s also worth a mention that polling in Kashmir region was decidedly on the lower side. In Pulwama, the polling percentage was in single digits.

In terms of overall vote share, BJP has the largest share of 4.87 lakhs, almost double of second best National Conference which mustered 2.54 lakh votes. PDP has reasons to rue that a mere 45,210 votes were polled in favour which is almost half of Congress’ one-lakh plus votes.

It still is not clear who would take up the chairmanship of 20 DDCs, one each in a district. The jockeying would now begin in earnest. Once all these 20 DDCs get constituted, we would know how many are controlled by which party. The independents could really tilt the scale either way.

In passing, Omar Abdullah is quick to point that it would be wrong to term PAGD as a Kashmir-centric group since it had won 35 seats in the Jammu region too.