Kejri makes Sood the “mentor” while schools are denied land to be operational! 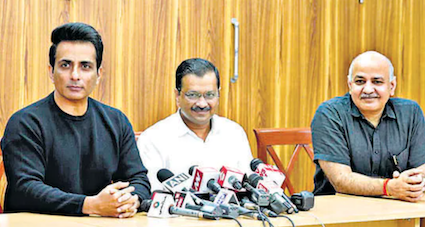 Interestingly, the initiative to guide students in government-run schools, is yet to be launched!

Earlier this month Bharatiya Janata Party MP Manoj Tiwari wrote to Union Education Minister Dharmendra Pradhan requesting him to convene a joint meeting of departments and agencies concerned so that the process of opening seven Jawahar Navodaya Vidyalaya (JNV) in Delhi can be expedited.

In 2016-17 a total of 62 new Jawahar Navodaya Vidyalaya schools were sanctioned by the central government out of which seven were sanctioned to Delhi. However, the school project was lying “inactive” since permanent land was not provided by the Delhi government.

BJP IT cell in-charge Amit Malviya also took to Twitter to share the screenshot of the education minister’s response to Tiwari’s query which mentioned that the school could not be opened due to lack of land availability by the Arvind Kejriwal-led Delhi government.

Arvind Kejriwal continues to lie to the people of Delhi, pull wool over their eyes.
Today, he appointed a Bollywood celebrity as brand ambassador of Desh ke Mentor, a still to be launched program.
Did the CM tell him that he hasn’t allotted land for 7 JNVs in Delhi since 2016-17? pic.twitter.com/j8rmCZlZtC

Vinayak Garg, the commissioner of the Navodaya Vidyalaya Samiti, even wrote to the Delhi Development Authority (DDA) on July 15 requesting it to expedite the allocation of the land however, the Delhi government did not reply to queries on the issue.

A total of 17 Navodaya Vidyalaya are presently stalled due to “non-receipt of land from concerned State governments. Out of these 17, while seven are of Delhi, three are from West Bengal. Chhattisgarh and Jharkhand are also other names on the list with Jammu and Kashmir and Bihar.