Kejriwal is thanked by Tikait for arranging water etc in Ghazipur 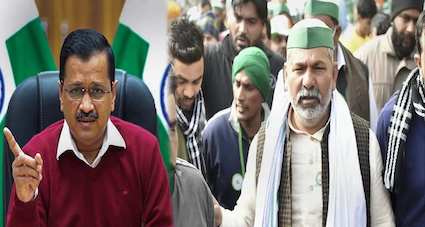 Tikait has been named as one of the farmer leaders who went back on his promise to Delhi Police on Republic Day. There are videos where he is inciting farmers into carrying sticks and speaking about thousands dying have also emerged.

Around 500 BKU members stayed put on the Delhi-Meerut Expressway on Friday, notwithstanding the Ghaziabad administration’s ultimatum to vacate the protest site. “We will not vacate the spot. We will talk to the Government of India about our issues. I urge the people to remain peaceful. Our talks with the government are going on,” Tikait told news agency ANI.

More farmers are joining in from western Uttar Pradesh and Haryana, following an emotional appeal made by Tikait, who has defiantly held his ground. Tension prevailed at the protest site throughout Thursday as police and paramilitary forces in anti-riot gear conducted flag marches on either side of it. However, excess forces were removed later at night.