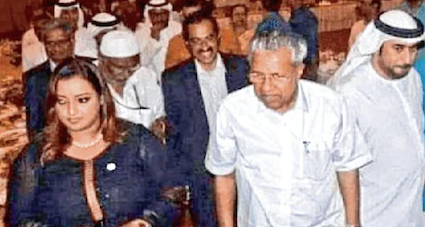 Gold smuggling case accused Swapna Suresh on Tuesday told media that Kerala Chief Minister Pinarayi Vijayan, his wife Kamala and daughter Veena were involved in the case. Swapna also demanded protection citing a threat to her life, according to ANI.

“I have already given 164 statements in court about a threat to my life. I have declared in court about all the people involved in this case. I have also filed a petition seeking protection in court. They are considering it. I have declared in the court about what is the involvement of M Sivasankar (then principal secretary to Kerala CMO), the honourable Chief Minister, CM’s wife Kamala, CM’s daughter Veena, his secretary CM Raveendran, then Chief Secretary Nalini Netto IAS, then minister KT Jaleel,” Swapna said, ANI reported.

Swapna told the media that Sivasankar contacted her when the Chief Minister was in Dubai in 2016. “At that time, I was the secretary at the consulate. Sivasankar told me that the CM had forgotten a bag and that the bag should be delivered to Dubai immediately,” she alleged.

Swapna Suresh, a former employee of the UAE consulate in Kochi, was released from prison in November last year, 16 months after she was arrested in the sensational gold smuggling case. She, also with another accused Sandeep Nair, was taken into custody by NIA on July 11, 2020.

The NIA, Customs and Enforcement Directorate (ED) conducted separate probes into the racket that was exposed with a gold seizure worth Rs 15 crore from the diplomatic baggage of the UAE Consulate at Thiruvananthapuram airport on July 5, 2020.

Several people, including Sivasankar and another former employee of the UAE Consulate, Sarith PS were arrested in the case.