Kerala gold scam: Sensational allegations on CM and his family 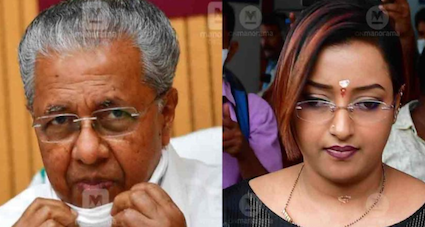 Not just Vijayan, the affidavit also drags his family and ex-minister KT Jaleel for their alleged role in the Kerala gold scam case.

In the affidavit filed last week, Swapna has alleged a bag with currency was sent for the Chief Minister, who was visiting the United Arab Emirates in December 2016, after Secretary of Chief Minister, Shivashankar, claimed that certain ’emergency requirement’ had been left behind.

“Mr.Shivashankar, Secretary to Chief Minister contacted me and told me that there was an emergency requirement as Chief Minster who has gone to the United Arab Emirates has somehow missed a very important parcel to carry along with him. He requested us to somehow send it to any Emirate in UAE and informed that his person will collect the same from there. Actually it was the Consulate that arranged all the extra diplomatic facilitation to the Chief Minister at the Abudhabi International Airport,” she has alleged, adding that diplomat Ahmed Al Doukhi, who is in Sharjah now, was asked to fly the same night to Sharjah by Air Arabia Flight.

She further claimed that Consulate PRO Sarith P.S was asked by Shivashankar to collect the parcel from him who was at Secretariat, through the Asst. Protocol Officer Harikrishnan.

On bringing the parcel to the Consulate as like our normal procedures, Sarith brought it to the Consulate General and scanned it and he had seen currency in the parcel along with some spice’s kind of images through the Consulate scanning machine. He immediately reported it confidently to me but as we were new to the organization We could not do anything about this,” she claimed.

The alleged role of former Minister K.T. Jaleel has also been highlighted in the affidavit along with the alleged involvement of the Chief Minister’s family. Swapna Suresh has claimed that Jaleel had a close relationship with the Consulate General.

“He had several close meetings with him without any approval or even without the knowledge of the Ministry of External Affairs,” as per Suresh. The accused has alleged that she was directed to clear several suspicious cartons, some heavier than others, from Thiruvananthapuram Airport, with claims that they contained the Quran.

Swapna Suresh has also gone on to claim that she and the Consul General were invited by Shivashankar to Cliff House, a meeting which had the Chief Minister, and his wife and daughter in attendance. A meeting was allegedly organised between Vijayan’s wife and daughter and the King and queen of Sharjah at her behest, she has claimed.

“This meeting which took place at Cliff House was without and against MEA clearance,” she claimed, adding that certain business proposals were discussed during this.

The Kerala gold scam dates back to July 2020, when Customs officials seized 30 kg of gold worth Rs.15 crore at the Thiruvananthapuram Airport from a diplomatic cargo addressed to a person in the UAE Consulate.