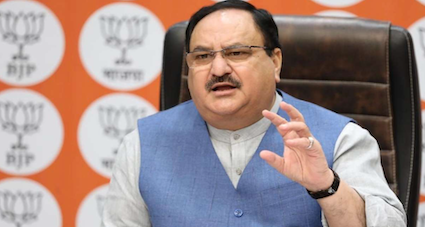 Bharatiya Janata Party (BJP) president JP Nadda came down heavily on Pinarayi Vijayan-led government in Kerala, accusing “it had not played its role to tackle the Covid-19 pandemic,”  which led to the sorry state of affairs.

Inaugurating the new party office in Kozhikode in north Kerala through a video conference, Nadda said Kerala has turned into “a model of mismanagement” under the Vijayan regime.

He said, “At this point in time, 1.08 lakh cases are present in Kerala, contributing to almost 50 per cent of the total burden of COVID cases. This is gross mismanagement. It is a model of mismanagement.”

He also mentioned while the model is RT-PCR to test Covid, the Kerala government stressed antigen tests as almost 70% of tests were antigen tests.

“It ignored repeated warnings of experts and failed to raise its test rate. The state also ignored some of the proactive steps taken by the Union government,” he said, adding that the Centre was willing to help the state always.

Nadda took the direct sweep on Vijayan and said Kerala is becoming a state identified by terrorist modules and the CM office is “under a cloud in case of gold smuggling case.”