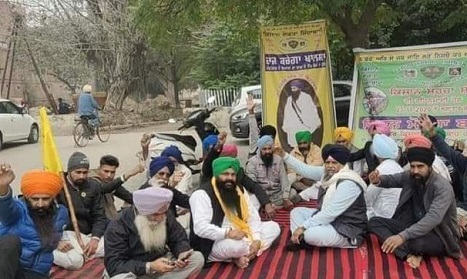 The farmers’ stir, at the doorstep of Delhi, is spinning out of control but that’s just appears to be part of a larger design. The bigger one is the secessionist forces clamouring for Khalistan and posing with picture of secessionist Sikh leader Jarnail Singh Bhindranwale.

“We are waiting till December 3 (the day of the meeting with government representatives). The matter better be solved or forget these barricades, we would even overpower them. When Uddham Singh could kill on foreign soil, this Delhi is nothing. We killed Indira; and (now) the chest of (Narendra) Modi..” says a farmers’ representative on camera to the clamour of approval around him.

Various posters have also emerged which have the image of Bhindranwale in the background, a Sikh leader of the 80s, who played into the narrative of Khalistan and sought an autonomous region for Punjab.

Reports have also emerged that a few Shromani Akali Dal leaders had raised the Khalistan slogan at Barnala railway station which had the district administration and police rushing at the spot.

With such disturbing images and utterances in public domain, it begs a question to Punjab chief minister Capt Amarinder Singh and to Congress party who have been at the forefront of farmers’ agitation for the last few weeks that whether they support such public display of secession of Punjab. Since these images are of a few days old, it does convey their quiet acquiescence if not oversight.

The impression is reinforced since Manohar Lal Khattar, chief minister of Haryana, went public on Thursday, stating that Amarinder Singh doesn’t appear serious in settling the farmers’ issue since the latter has been unreachable for the last three days to his call.

There are all the signs of this morphing into another anti-CAA stir since the new acts by the Centre appear reasonable to majority of farmer, allowing them to sell their produce anywhere in the country rather than be bound to their vicinity which is manipulated by big farmers and brokers, arguably hand in gloves with political power, and who are seen stoking the present agitation.

Delhi is presently under siege with farmers approaching the Capital and there being shutdown call around the country on Thursday.