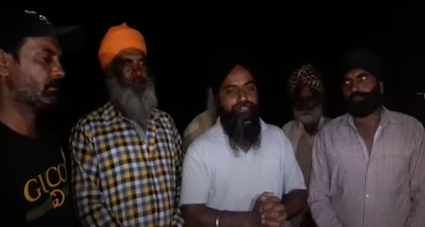 The family of Lovepreet Singh, one of the protestors who lost his life during the protest in Uttar Pradesh’s Lakhimpur Kheri, took a dig at the Opposition for making the death of their son and other protestors a matter of their politics.

In a video, Makkhan Singh, brother-in-law of Lovepreet, can be seen requesting Opposition leaders to not to politicize the issue.

“Such elements who want to get political gain during such a painful time we request them not to do such a thing and also don’t disturb others,” he could be heard saying in the video

Makkhan Singh along with other family members and co-villagers also expressed their satisfaction over financial and legal support extended by chief minister Yogi Adityanath-led government.

Right after the violence, The government in Uttar Pradesh provided a compensation of Rs 45 lakh to families of all eight people killed in the incident.

The Congress is indulging in vote bank politics over the Lakhimpur incident.  It has been targeted for using the incident to gain political mileage. Rahul Gandhi was even greeted with ‘no to your fake sympathies’ posters.

Moreover, the party has announced compensation only for five people- the four farmers and the journalist who died in the incident.

The BJP, however, says the other three- two BJP workers and driver of the Thar vehicle, were lynched to death, and pointed out that Rahul Gandhi and Priyanka Gandhi chose not to visit these three families during their Lakhimpur visit.