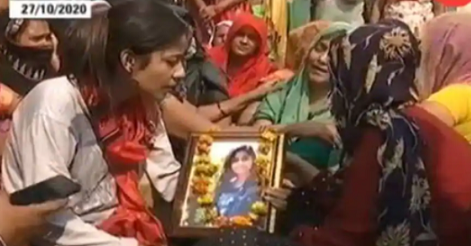 Nikita Tomar, first molested and then murdered in front of her college in Faridabad in broad daylight on Tuesday, wanted to serve in the armed forces. She wanted to serve the nation, as per a report.

Nikita had filed a molestation complaint against Touseef, the man accused and arrested for her murder. The video, now viral, shows him shooting Nikita dead, accompanied by his friend Rehan.

The two accused allegedly tried to make her sit in the car after she stepped out of her college in Ballabhgarh. She had appeared for the last exam on Monday — the day she was murdered.

Touseef, Nikita’s classmate in Class 12, was coercing the victim for conversion to Islam and into marrying her, alleges the victim’s family. “Tauseef’s overtures to (her) to convert to Islam and marry him” had been turned down by Nikita, says her family.

It’s learnt that Touseef had political connections. He is related to Congress MlA from Nuh, Aftab Alam. He hails from Mewat.

The victim’s family has alleged that Touseef wanted to kidnap Nikita along with his friend. Failing to do so, he shot her dead.

Apparently, he was smitten by Nikita who had spurned all his advances.

Nikita was preparing for NDA entrance exams. Her family said she had secured 95 percent in Class 12 board examinations and was among the toppers.