Know what is ‘secular’ to avoid Hindu-haters trap 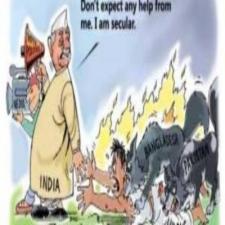 India seemingly has armies of self-appointed guardians of secularism, such as those who petitioned the Supreme Court to turn Ayodhya’s disputed site to a public purpose. But secularism in India is as enigmatic an animal as the proverbial elephant variously described by blind men: it has been all things to all people.

Indeed, although it frequently figured in the debates of the Constituent Assembly, the word “secularism” did not appear in the 1950 Constitution of India; Nehru was initially cold to it:

His influential minister for Agriculture, P S Deshmukh, is on record for questioning “the specious, oft-repeated and nauseating principle of secularity of the state. I think that we are going too far in this business of secularity.” Nauseating or not, the principle was parachuted into the Constitution by the 42nd amendment of 1976 (promulgated during the Emergency), which turned India from a “sovereign democratic republic” to a “sovereign, socialist secular democratic republic.” But there was a catch: “secularism” was left undefined, which is uncharacteristic of Constitutional amendments.

If so, we should expect it to have the conventional meaning. Let us, therefore, heed Nehru’s advice and turn to our dictionaries: “The principle of separation of the state from religious institutions,” says the Oxford Dictionary; “indifference to or rejection or exclusion of religion and religious considerations,” adds the Webster.

The former definition reflects the expulsion of Christianity from state matters which European nations opted for (to varying degrees) from the eighteenth century onward; also of Islam by Turkey in 1923. Was such a concept ever relevant to the Indian context, where compulsion in matters of religion and belief is repulsive to the ethos of the land? No Jain, Buddhist or Hindu king or emperor, to my knowledge, ever imposed a “state religion”; nor was India the scene of “religious wars,” whatever doctrinal frictions there may have been. Even those Islamic rulers who declared their intention to draw India into dar al-islam failed in the end.

Besides, the same Constitution which declares all Indians equal irrespective of their religion, caste or gender, proceeds, in Articles 28 and 29, to give religious and linguistic minorities the right to manage their places of worship and educational institutions. The Civil Code, too, is religion-specific as regards marriage, divorce, inheritance, etc.

This is anti-secular on the face of it. How do we get out of this embarrassing situation? By what I call a “sleight of word” — by declaring that “secularism” actually means something else: for instance, equidistance from, or neutrality towards, all religions (which is not the case), tolerance (why not use this word, then?), or perhaps some combination of atheism, rationalism and agnosticism (why not those words?).

Strictly speaking, then, India’s brand of secularism denies equal rights to a perceived “majority”. It has no roots in the history of the land: the word “secularism” does not exist in any Indian language (except for recent coinages); more importantly,

“India has all along been trying experiments in evolving a social unity within which all the different peoples could be held together, while fully enjoying the freedom of maintaining their own differences. … This has produced something like a United States of a social federation, whose common name is Hinduism,”

Thus wrote the impeccably secular Rabindranath Tagore in his 1917 essays on Nationalism.

Already expressed in Ashoka’s Edicts and many classical texts, this mix of integration, mutual respect and “full freedom” could, or perhaps should, have produced an Indian alternative to the European concept by building on the land’s long experiments in religious coexistence.

Instead, secularism has been a source of endless controversy and bitter feelings. As Taslima Nasreen once declared,

“Most secular people are pro-Muslims and anti-Hindu. They protest against the acts of Hindu fundamentalists and defend the heinous acts of Muslim fundamentalists.”

Or to quote the respected advocate, statesman, educationist and litterateur K M Munshi:

“The word ‘secularism’ in India has no bearing on the attitude and conduct of individuals, nor of religious groups. However, it has been used as a slogan of varying significance. In its name, anti-religious forces, sponsored by secular humanism or Communism, condemn religious piety, particularly in the majority community. In its name, minorities are immune from such attention and have succeeded in getting their demands, however unreasonable, accepted. In its name, again, politicians in power adopt a strange attitude which, while it condones the susceptibilities, religious and social, of the minority communities, is too ready to brand similar susceptibilities in the majority community as communalistic and reactionary. How secularism sometimes becomes allergic to Hinduism will be apparent from certain episodes relating to the reconstruction of Somnath temple. These unfortunate postures have been creating a sense of frustration in the majority community.”

By another sleight of word, such a statement would be viewed as “communal” today. But whether this “majority” really exists or is a construct deserves our attention. So does the important application of secularism to the world of education.

(We gratefully acknowledge this piece by famous Indologist Michel Danino which first appeared in Pragyata).