Kohli, Anushka by his side, relives his journey in 100th Test 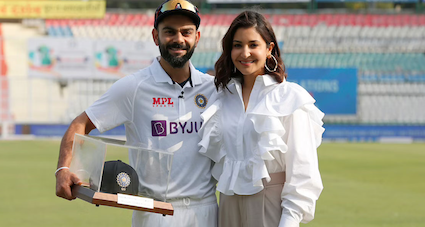 India’s batting star Virat Kohli embarked in his 100th Test in Mohali against Sri Lanka in the first Test today and he had his wife Anushka Sharma besides him.

Kohli hoped the next generation takes inspiration from the fact that he could achieve the milestone despite playing in all three formats through a gruelling international schedule.

“In present day cricket, with the amount we play with three formats and an IPL, the one takeaway the next generation can take from me is that I played 100 games in the purest format,” Kohli said after being felicitated by Rahul Dravid.

Due to bio-bubble restrictions, it was Dravid, who presented Kohli with a commemorative cap and also a glittering memento.

Kohli had his actor wife Anushka Sharma for company and brother Vikas Kohli was in the stands.

“It is a special moment for me. My wife is here and so is my brother. Everyone is very proud. It is indeed a team game and it couldn’t have been possible without you.

“Thanks to the BCCI as well,” Kohli said.

Coach Dravid gave a warm speech, waxing eloquent about Kohli’s longevity and asked him to “double it up”.