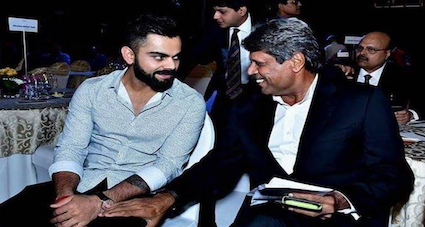 After taking the Indian test cricket team to new heights, Virat Kohli decided to step down as the Test captain.

The entire cricket fraternity including past and present players congratulated Kohli on his successful stint.

Former India skipper Kapil Dev also welcomed Kohli’s move and said that he must have thought hard about his decision before coming to such a conclusion.

In a recent interview with Mid-Day, the former all-rounder said that Kohli did the right thing by stepping aside, as he didn’t appear to be “enjoying” captaincy anymore.

Kapil Dev also asserted that Kohli would “have to give up his ego and play under a young cricketer”.

According to Dev,  Kohli could learnt from Sunil Gavaskar who under his captaincy and Dev himself played under Mohammad Azharuddin and Krishnamachari Srikkanth.

“Even Sunil Gavaskar played under me. I played under K Srikkanth and Azharuddin. I had no ego. Virat will have to give up his ego and play under a young cricketer. This will help him and Indian cricket. Virat should guide the new captain, new players. We cannot lose Virat, the batsman…no way,” concluded Kapil.

Kohli holds the record for most appearances as Indian Test captain with 40 wins in 68 matches. He led the team to the top spot of International Cricket Council (ICC) Test rankings.

Last month, Kohli was replaced by Rohit Sharma as the ODI captain, It’s yet to be seen whether Rohit will lead the Test side for India’s next series against Sri Lanka at home next month.