“Krishna Janmabhoomi” case allowed to be heard in court 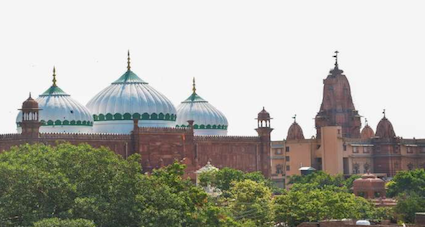 A lawsuit demanding the removal of a mosque in Mathura said to be built on the “Krishna Janmabhoomi” or the birthplace of Lord Krishna has been allowed by a court in Uttar Pradesh.

This means that the lawsuit can be heard by a court.

The lawsuit is one of the many by Hindu outfits demanding the removal of the 17th century Shahi Idgah Masjid from the Katra Keshav Dev temple, claiming the mosque has been built on the birthplace of Lord Krishna.

The Shahi Idgah mosque, the petitions say, was built at the Krishna Janmabhoomi on the orders of Mughal emperor Aurangzeb in 1669-70.

Lucknow resident Ranjana Agnihotri had filed the lawsuit as the “next friend of the infant Lord Krishna” of the Katra Keshav Dev temple.

“As worshippers of Lord Krishna we have the right to file a suit demanding restoration of his property. The mosque was wrongly built on Krishna Janmabhoomi. There was a compromise several years ago on the sharing of property, but that compromise was illegal,” said Gopal Khandelwal, lawyer for the petitioner.

The civil court in Mathura had earlier dismissed the case saying it cannot be admitted under the Places of Worship Act of 1991, which maintains the religious status of any place of worship as it was on August 15, 1947.

The only exception to the law was the Ayodhya temple-mosque case involving the 16th century Babri mosque razed in 1992 by Hindu activists who believed it was built on the ruins of an ancient temple. The Supreme Court in 2019 handed over the mosque site to Hindus for a grand Ram temple and ordered alternative land for a mosque.

The Mathura court had earlier dismissed the Krishna Janmabhoomi suit saying if it was registered then a large number of worshippers may approach the court in various cases.