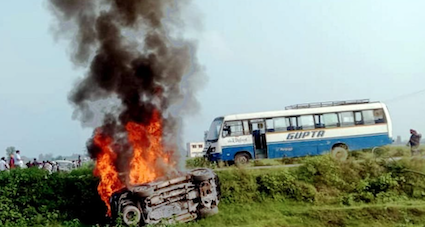 The farmers, who have been protesting in Uttar Pradesh’s Lakhimpur Kheri over the death of four farmers, have called off the protest after they reached a compromise with the government.

Alongside, the Uttar Pradesh government announced that a retired High Court judge would probe the Lakhimpur Kheri violence. It will give Rs 45 lakh compensation and a govt job to all those who were killed in the incident. It will also pay ₹10 lakh each to the injured.

According to UP ADG (Law & Order) Prashant Kumar, an FIR will be registered based on the farmers’ complaint, and no criminal will be spared. He further added that the arrests would be made soon.

Meanwhile Amit Malviya, head of BJP IT Cell, tweeted a police complaint by kin of a deceased Shubham Mishra who has named one Tejinder Singh Virk who is affiliated with Samajwadi Party and whom “Akhilesh Yadav is terming as a farmer leader.”

Meanwhile, no political figures would be allowed to entry to Lakhimpur Kheri in the near future.

Elsewhere, Punjab Congress leader Navjot Sidhu protested outside the residence of the Punjab Governor in Chandigarh without any permission which led to his arrest. Chandigarh Police detained other Congress workers also who were protesting and raising slogans with Sidhu.

The state government is not allowing anybody’s arrival at the Lucknow airport as Opposition looks to milk the incident to their advantage.

Numerous political leaders have attempted to visit the site of the violence but have been prevented by UP Police. Akhilesh Yadav has been put under house arrest and Priyanka Gandhi has been placed under detention.

Looking at the chicanery of Opposition leaders, Amit Malviya has posted a tweet in which it’s shown how mercilessly farmers are being beaten up in Hanumangarh, Rajasthan in an unrelated incident. “Somehow this escapes the Congress leader (Priyanka Gandhi),” Malviya said.

Meanwhile, the Lakhimpur Kheri violence also came up for discussion in the Supreme Court that is hearing a petition to allow farmers to hold protests in the heart of Delhi.

The apex court questioned why the farmers were continuing their protest since it had already put a freeze on the three contentious farm laws passed by the Centre.

Representing the government, Attorney General KK Venugopal said, “There should be no further protests to prevent unfortunate incidents like the one in Lakhimpur Kheri yesterday”.

After INLD supremo Om Prakash Chautala was sentenced to 4 years of rigorous imprisonment in a disproportionate assets case, the Bharatiya Janata Party (BJP) has stated...