Lakhimpur Kheri tragedy: How Tikait was brought on the same page by Yogi Administration? 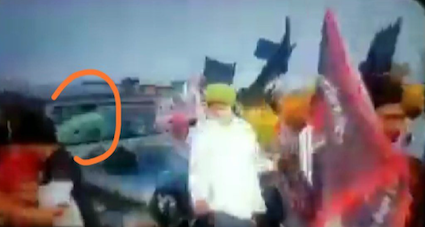 As the dust seems to have settled on the Lakhimpur Kheri tragedy, with the protesting farmers and the Yogi Adityanath administration sharing a common stage, Opposition and Lutyens Media is flogging a spent colt, unmindful that a dying horse’ last kick is often fatal, in this case on the apple they are eyeing in the forthcoming state assembly polls.

Priyanka Gandhi has videographed herself and could preen at the noise it has made in favourable media outlets; Akhilesh Yadav has got footage; Navjot Singh Sidhu has flared his nostrils in Chandigarh and CMs of Opposition (Bengal, Chattisgarh, Rajasthan, Punjab Jharkahnd, Maharashtra), Owaisi included, are looking to reach the kin of dead farmers—killed BJP workers obviously don’t deserve this empathy.

But photo-ops aside, what’s there to gain? When Rakesh Tikait and Yogi administration are sharing a common stage (see image below), and kin of deceased farmers have accepted the compensation to go with a job, who could you raise your flag against?

All these muck-rakers could claim is that a certain BJP leader deliberately mowed down farmers with one of its car in the caravan. We have two videos in social media, which offer the readers a moment to come to their own conclusions.

There is one video by India Today (below) which shows that a caravan of cars is passing between converging farmers who are raising slogans. Then appears a car which appears to being attacked with stones and lathis.

There is a video grab (main image), purportedly, seconds after this attack on car. It shows the vehicle, its windscreen broken, wading into a group of farmers, who have their backs to the vehicle. It apparently led to the tragedy. Thereafter the BJP workers in the car were beaten to death, including the driver.

The speed at which Yogi Administration reacted to the situation took the wind out of Opposition’s sails. The chief minister had finished a programme in Sitapur, had flown to his hometown Gorakhpur, when the tragic event made him fly overnight to his official residence in Lucknow. His trusted in administration and ministry were summoned, roles assigned, and before the day broke out the fire-fighting had begun in startling earnest.

The coup of course was to bring the face of farmers’ protest, Rakesh Tikait, on the same page. The state administration was faced with the dilemma: To let or not let Tikait come to Kheri in a deeply combustable situation. The feelers were sent, trust was offered, and Tikait was let in. What’s remarkable is he was persuaded too and a settlement of compensation, job, enquiry etc was quickly mutually agreed upon.

How It All Happened

In due course, heads are bound to roll if one know how Yogi Administration functions.

On September 26, Minister of State Ajay Mishra had allegedly said that “kisanon ko sudhar denge (Farmers would be set aright).”

It served to ignite the anger of farmers. The local Intelligence Unit (LIU) had given a warning of their spiralling anger no less than eight days before the tragedy. However, those responsible to take a call, apparently didn’t pay heed to it.

On the day of the event in Lakhimpur Kheri, deputy chief minister Keshav Prasad Maurya was persuaded to come by road and not by helicopter. Another alert went out, eight hours before the programme.

Then MoS was asked to desist from going to Banveerpur village which was close by the helipad where farmers had gathered in tens of thousands. The minister was to inaugurate a wrestling competition in the village. However, he ignored the warning and reached Tikonia crossing, some four kilometres away from the village. The helipad, which had been taken over by the farmers, was a mere 50 metres away.

Thereafter the tragedy happened. One side claims that farmers were mowed down without provocation. The other side asserts that the driver lost control after the vehicle had been murderously attacked by the farmers.

If the driver did it deliberately, he ought to be a mad man for there was no chance the car-occupants could’ve avoided the consequences. The one plausible reason does appear that he lost control due to attack—as the two videos in this story seem to convey—which led to the tragedy.