Last speech now, and last dice then when Azad had turned tables on Sonia Gandhi 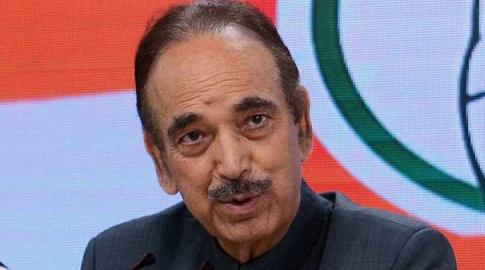 Ghulam Nabi Azad took over as Chief Minister of Jammu and Kashmir in November 2005. At a time when an earthquake had hit Uri and neighbouring areas of Baramulla district a month earlier. To a lesser extent, some damage had been caused in some areas of Poonch also. In his illustrious political career spanning 41 years, this was one of the most important milestones.

Hailing from remote Bhalessa area of beautiful Bhaderwah tehsil of Doda district, Azad’s political journey has been rather eventful. To reach the top executive post in his home state, he had to face an unforeseen challenge thrown at the last moment, in October 2005. This challenge was by his predecessor Mufti Mohammad Sayeed’s attempts to renege on agreement for rotational chief ministership of the state reached between the Congress and the People’s Democratic Party (PDP) in October 2002.

In the Legislative Assembly elections held in J&K in August, September and October 2002, the government of Farooq Abdullah had faced defeat. His party, the National Conference, could win only 28 out of 87 seats. The Congress won 20 seats, the PDP 16, the J&K Panthers Party four and several independent legislators won both in Jammu as also Kashmir region.

Azad had led the Congress campaign in the state at that time and 15 of its MLAs hailed from the Jammu region. He claimed to have mustered the support of 40 legislators at one time. However, the magic figure of 44/87, a majority, eluded him. It was then that the PDP and the Congress entered into an arrangement for rotational CM for three years each. PDP’s Mufti had become CM on November 2, 2002, under this agreement.

At the last moment, Mufti’s PDP started campaigning for his continuation at the helm of affairs. The argument given was that Mufti had done very good work during his tenure and the Congress should be magnanimous and make this sacrifice. In other words, Azad should let go of the opportunity to be CM of J&K and Sonia Gandhi virtually acceded to PDP’s request.

Azad, however, was not ready to give up so easily, nor were the legislators who supported him willing. Then started a cat and mouse game which was nothing less than a major upheaval. JK State Guest House at Chanakyapuri in Delhi became the epicentre of hectic political activities. Azad’s loyalist Tara Chand, who was then Speaker of the assembly, played a major role.

Most of the Congress legislators from J&K, and 15 independents took residence in the guest house. It was then that real tough behind the scenes negotiations started within the Congress party. A coterie working closely with Sonia worked as an adversary within the party, and wanted Azad to let Mufti continue as CM.

It was then that some politicians and bureaucrats close to Mufti started sending messages to media persons in Delhi and Srinagar that “Madam” had blessed him. This was meant to convey that Sonia was willing to make the “sacrifice” and let Mufti continue in his post. Both PDP and Congress coterie had perhaps not counted that Azad had an ace with him and could turn tables on them.

One fine day, Speaker Tara Chand handed resignation letters from 21 legislators to “her highness”. These letters had been collected much earlier, over a week, as Azad loyalists worked behind the scenes. Among them were resignations of several Congress MLAs and independents who were supporting the PDP-Congress coalition.

This created a situation wherein Mufti’s government, without the support of these 21 MLAs, became untenable. These legislators said that in the event of Mufti’s continuation as CM, they will all quit the assembly. The PDP, the Congress coterie working against Azad, and those in the media pitching for Mufti’s continuation, then had no answers to this.

It was only then that Mufti made way for Azad, with all routes plugged. Perhaps it was one of the keenest behind the scenes political battles the veteran Congress leader had won. During his heyday, Azad has played king-maker in case of many CMs of the Congress in several states all over India. Mufti’s PDP could answer Azad in June 2008 only when it manufactured an alibi to withdraw support to him before the completion of his tenure.

A dejected Azad then resigned from the CM’s post on July 7, 2008, and his tenure ended on a bitter note. However, he ensured that the PDP stayed in the wilderness for six years as the Congress joined hands with the NC. Omar Abdullah became the CM on January 5, 2009, with the Congress support. The PDP improved it’s tally from 16 MLAs in 2002 to 21 MLAs in 2008. It had to stay in the opposite from 2008 to late 2014, one complete tenure.

Azad’s political journey continued uninterrupted as he entered the Rajya Sabha then with the support of the NC. Even when a PDP-BJP coalition started ruling J&K on March 1, 2015, it failed to prevent his re-election to the Rajya Sabha. This tenure is about to end in another five months and he may have made his “last speech” in the Upper House already.

He was acutely aware of this possibility and his calculations are to the point usually. Even if they make little sense to others as they fail to grasp their true import. That is why he ignored Vice-President Venkaiah Naidu’s query as to why he said that this could be his “last speech”. That may indeed become true with the passage of time.