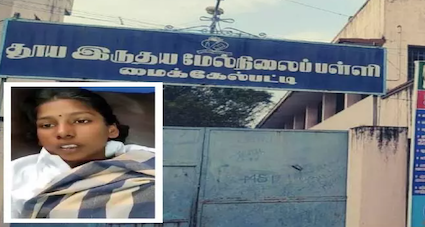 By now, everyone is aware of the Tamil Nadu case where a class 12th student M Lavanya killed herself after being forced to convert into Christanity. The incident has brought a much needed focus on the roles of organisations including schools and NGOs in the proliferation of extremist and radicalisation in the country.

But first thing first. Despite Lavanya’s dying declaration on record, the Tamil Nadu police hasn’t mentioned either the conversion angle or acknowledged presence of such a video in the FIR. Amit Malviya, head of BJP’s IT cell has made this sensational tweet.

We at Newsbred have reported at regular intervals how the role of external support to such organisations is the most potent driving factor in the spread of conversion racket and radical ideologies in India.

One Twitter user @Vijay Patel (https://twitter.com/vijaygajera) has also shared a snapshot of various organisations that receive large amounts of ‘foreign donations,’ and allegedly misuse those funds by fuelling a dangerous anti-India narrative.

His twitter thread points towards UK-based Save the Children Fund which registered itself as Bal Raksha Bharat in 2008. Interestingly, one of the primary donors of STC was ActionAid, which was banned from receiving foreign fundings by the Indian government in 2015.

Before diving in ActionAid, it is important to understand the role of Harsh Mander. Harsh Mander has served as the head of ActionAid India.

He started his own NGO the Centre for Equity Studies (CES) with a European Jean Dreze while working as IAS officer for the Indian government. Interestingly, ActionAid, Save the Child and Oxfam, all the NGOs that are on the Indian government radar for their anti-Indian activities, have funded Mander’s CES, alleges Patel.

The 2014 report by Intelligence Bureau also highlighted why it thinks foreign-funded NGOs need to be monitored: “A small group of activists and NGOs have at times succeeded in shaping policy debates in India. Apart from that, in some cases it is observed that in a cyclic process, an NGO is set up, funds are obtained from abroad, a few articles are commissioned, a PR firm is recruited and, slowly, with the help of the media, an image is created. And then awards are procured from foreign countries to enhance the image, after which Government machinery finds it (much) more difficult to act against the awardee.”

The important part is that the most expired FCRA registrations is in Tamil Nadu where the licences of almost 1,448 NGOs have expired.

While Indian government has tightened the rules on non-governmental organisations over the past two years, there are thousands of Islamist and Evangelical groups working as NGOs but were misusing the funds for religious conversions in India.

Given what happened with Lavanya, these NGOs who have established themselves for working for child rights, have not even said something.

Fat chance they would do so, this doesn’t fall under their agenda!