Lavrov’s visit to India: Where are the India-Russia ties headed? 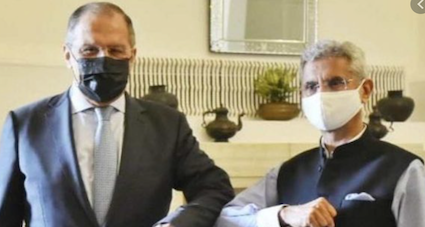 On Monday, the prominent Moscow daily Kommersant commented that Russian Foreign Minister Sergey Lavrov’s visit to New Delhi on April 5-6 “is not going to be easy because relations between the two countries are facing an increasing number of risks, which particularly include the Chinese factor test.”

Indeed, the daily politely printed a laboured Indian explanation that the crucial difference between Russia-India and Russia-China relations is that closer ties between Moscow and Beijing “mostly stem from the two countries’ common negative agenda” with the United States, but “there is neither a negative agenda nor related damage in terms of Moscow’s relations with New Delhi.”

Again, on Monday, another Moscow paper Nezavisimaya Gazeta quoted a Russian pundit, Professor Sergei Lunev at the Moscow State Institute of International Relations, as saying, “Relations have been stalled for the past ten years. Economic ties are suffering in particular. The Soviet Union used to be one of India’s top three economic partners, but Russia barely makes it into the top twenty.”

But, again, the professor pointed out, “There also are some positive aspects. For instance, cooperation is underway on the Sputnik V vaccine. India will produce it in larger amounts than Russia itself. Defence cooperation remains a cornerstone of relations and progress continues here on all tracks, from the S-400 systems to small arms. Russia accounts for half of India’s weapons exports.”

These frank opinions are the tip of the iceberg, as a certain distancing has appeared between Moscow and Delhi lately. This must be the first time that a Russian Foreign Minister undertook a whirlwind regional tour of India and Pakistan. More importantly, this must be a rarest of rare occasions when a visiting Russian foreign minister was not received by India’s prime minister.

The latter part is particularly glaring as PM Modi enjoys diplomatic interactions and would doubtless allot quality time for Mike Pompeo or Antony Blinken. (Modi found time even for visiting British foreign secretary Dominic Raab recently.) Alas, the signalling is that Russia is no longer a priority.

Yet, this isn’t about diplomatic signalling alone. In the feudal darbar culture in Delhi, this also signified a signpost for the entire governmental machinery — bureaucrats and politicians, civilian and military alike. Whereas, the perception through Modi’s first term had been that he was a stakeholder in India-Russia friendship, investing in it personally his time and energy.

Even the political establishment in Washington watched it with shock and awe. An acerbic piece in the Washington-based online journal Nikkei Asian Review last August by Marco Rubio — high-flying Republican senator from Florida and acting chairman of the US Senate Intelligence Committee, co-chair of Congressional executive commission on China and a ranking member of Senate committee on foreign relations — carried barbs personally aimed at Modi as if PM was acting under some magical spell that Russian President Putin cast on him.

Now, Rubio himself may have some difficulty to locate India on a world map. Clearly, this favourite sidekick of former president Donald Trump — and more so, secretary of state Pompeo — was standing in to transmit a sinister, ominous, barely-veiled warning to Delhi that it was about time Modi disengaged from the India-Russia relationship.

That is why today, any signalling that Modi has lost interest looks a cowardly behaviour and can be lethal to the India-Russia relationship. It may pacify the US foreign policy establishment and President Joe Biden himself, who are paranoid about “killer” Putin and frantic that so long as Russia ties continue to provide an anchor sheet for India’s strategic autonomy, the agenda to lock in India in the American stable as a military ally will remain elusive.

To be sure, the US remains vigilant about every breath Modi takes, every move he makes, every bond he forges with Putin to energise India’s relations with Russia. The US geo-strategy is heavily loaded, too, as it is proving to be immensely rewarding — India has already given up its fascination for Russian energy and has settled for US shale oil; Russia’s status as India’s number one arms supplier is being steadily replaced with American weaponry.

Late on Monday, in fact, even as Lavrov’s plane was landing in Delhi, Secretary of State Blinkon announced in Washington the names of Turkish officials and entities who will be sanctioned w.e.f  Wednesday for Ankara’s acquisition of the advanced S-400 Russian air defence system. A timely reminder for External Affairs Minister S. Jaishankar!

Surely, Lavrov was asked about the US pressure regarding India’s S-400 deal. He replied, “This has been publicly and without any hesitation announced by the United States. Everyone knows this well. We are also well aware of the response from India.” Lavrov added, “American ‘calls’ were not discussed today (with Jaishankar.)… I did not feel any hesitation here on the part of our Indian friends and partners.” Jaishankar of course kept mum.

Interestingly, Lavrov in his characteristic way also chose to unilaterally comment on the “Asian NATO” (read Quad). He said, “Today we exchanged opinions on this matter. We and our Indian friends have a common position that this would be counterproductive (as a military alliance.) We are interested in making our cooperation inclusive and keen for it to work towards something and not against anyone.” But Jaishankar wouldn’t respond. He instead titled his head sideways and with an enigmatic look curled his lips.

China realises that India is best left alone to explore the pathway it has chosen, and to self-assess later with hindsight the efficacy of such a trek. Thus, things have ground to a halt in the disengagement process in Ladakh. Equally, Lavrov’s visit shows that Moscow too is giving a wide berth to Modi Govt. In his opening statement at the joint press conference with Jaishankar, Lavrov recalled, “By tradition, our relations stand out for mutual respect. They are intrinsically valuable and not subject to opportunistic fluctuations.”

When a veteran diplomat brings himself to reminisce, the striking thing is that he thought it important and necessary to speak in plain words. Lavrov has a well-earned reputation for being frank. Comparisons have been drawn frequently in the West between Lavrov and the iconic figure of the Soviet era Andrey Gromyko. On the occasion of Gromyko’s 110th anniversary, in a poignant speech in Moscow in December 2019, Lavrov said,

“For Russian diplomats, the Gromyko school is primarily about patriotism, professionalism, self-discipline, the ability to delve deeply into the heart of a matter, to persistently and reasonably promote the interests of the Fatherland, and to seek effective solutions in the most complicated situations.” Succinctly put, that was what Lavrov’s mission to Delhi aimed at. Now, as they say, the ball is in Modi’s court.

(Panchmukha is divergent viewpoints floating on internet, brought by NewsBred for its readers. They don’t necessarily reflect our view but makes our platform colourfully diverse. This is a piece which MK Bhadrakumar, an ex career diplomat, who writes mainly on Indian Foreign Policy on his blog, Indian Punchline,)