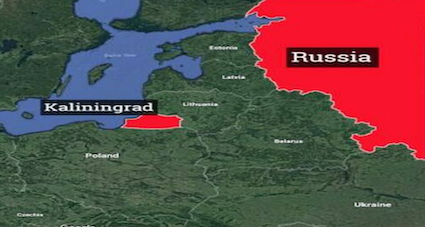 The Russian Foreign Ministry has responded to Lithuania’s partial blockade of Kaliningrad, writing in a statement that they consider the “provocative measures” to be “openly hostile” and warning that the Kremlin may take action to “protect its national interests.”

Kaliningrad is sandwiched between the EU and NATO members Poland and Lithuania. Supplies from Russia are delivered via rail and gas pipelines through Lithuania – which announced last week that it was banning the rail transit of goods subject to EU sanctions, which include coal, advanced technology, metals and construction materials.

“If in the near future cargo transit between the Kaliningrad region and the rest of the territory of the Russian Federation through Lithuania is not restored in full, then Russia reserves the right to take actions to protect its national interests,” the statement reads.

They have demanded that Lithuania immediately lift the ban on a number of goods to the Kaliningrad region.

Earlier Monday, the Kremlin called Lithuania’s announcement “unprecedented” and “in violation of everything there is.”

“The situation is more than serious and it requires a very deep analysis before formulating any measures and decisions,” said Kremlin spokesman Dmitry Peskov in a statement to the press.

Lithuanian Foreign Minister Gabrielius Landsbergis said they were simply complying with sanctions imposed by the EU, and that they were taken after “consultation with the European Commission and under its guidelines.”

“Sanctioned goods (will) no longer be allowed to transit Lithuanian territory,” he added.

Kaliningrad governor Anton Alikhanov says that the ban, which was confirmed on Friday, affects roughly 50% of all imports. He urged citizens not to panic-buy…

Quite possibly the biggest Russia-West provocation of the entire four-month long war in Ukraine has occurred this weekend, but few in the media establishment seem to be taking notice of the singular event which has the potential to quickly spiral toward a WW3 scenario.

Anton Alikhanov, the governor of the Russian oblast which has a total population of some one million people (with Kaliningrad city including almost 450,000 – and 800,000 total if outlying suburbs are counted) is urging calm.

Russian officials and media have long warned against what they dubbed Western aims to “blockade” Kaliningrad. Crucially, the EU enforcement measure being implemented from Vilnius marks a complete break in a three decade long treaty that’s been in effect…

Ahead of the new Lithuanian transit ban taking effect, the state railways service was reportedly awaiting final word from the European Commission on enforcing it.

Brussels then ruled that “sanctioned goods and cargo should still be prohibited even if they travel from one part of Russia to another but through EU territory,” according to Reuters.

In Moscow’s eyes, this is tantamount to laying economic siege to part of Russia’s sovereign territory and one million of its citizens. When the EU first proposed the blockage of goods as part of the last major sanctions package in early April, Kremlin officials warned of war given Moscow would have to “break the blockade” for the sake if its citizens.

Kaliningrad’s governor Alikhanov has already called on Russian federal authorities to prepare tit-for-tat measures against Lithuania in wake of the transit ban.

“These steps are illegal and may entail far-reaching implications for Lithuania and the European Union. In particular, I would like to quote a few paragraphs from the Joint Statement on EU Enlargement, with references to international agreements, the documents which both the European community and the Russian Federation acceded to,” Alikhanov  said Saturday.

Additionally he cited a key condition that was part of Lithuania’s 2004 accession to the EU. He quoted the prior agreement saying that the Baltic state “will apply in practice the principle of freedom of transit of goods, including energy, between the Kaliningrad Region and the rest of Russian territory.”

“In particular, we confirm that there shall be freedom of such transit, and that the goods in such transit shall not be subject to unnecessary delays or restrictions and shall be exempt from customs duties and transit duties or other charges related to transit,” Alikhanov quoted the Joint Statement further as saying.