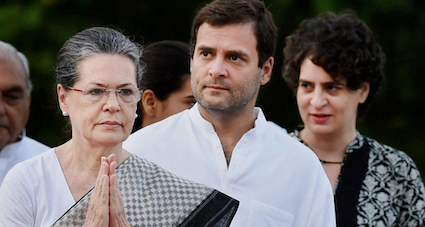 NDTV today said that in an attempt to relaunch itself ahead of the crucial 2024 general elections, the Congress party has agreed on its much-touted “one family, one ticket” norm but with a clause that exempts the Gandhis.

No sooner it was published, titled “Congress clears key reforms with loophole for Gandhis…”, that the three-day “Chintan Shivir” in Rajasthan’s Udaipur which began on Friday, the Congress agreed that a “One Family, One Ticket” rule will return, with a rider that exempts the Gandhis”

On the “One Family, One Ticket” rule, which bars more than one person from a family from contesting elections, the Congress has hinted in advance that this may spare the Gandhis – Sonia Gandhi and her children Rahul Gandhi and Priyanka Gandhi Vadra,” said the NDTV report.

It further quotes the Congress leader Ajay Maken as saying when asked whether the Gandhis are exempted, “There is unanimity on this rule. If family members still want to contest them they should have been active for five years. They are active for the last five years. Priyanka Gandhi started working formally for the party in 2018.”

The media outlet thereby concluded that the rule’s rider, which allows all three Gandhis to contest, indicates a loophole, reinforcing critics’ claims that the party will make just cosmetic changes at a time when a major revamp is needed.

Following NDTV’s Tweet, Congress and the party loyalists launched a scathing attack on the media outlet accusing it of spreading fake news. Youth Congress national president Srinivas BV called it fake news, clarifying that the rule is applicable for everyone in the party, not just the Gandhi family. He wrote, “Fake News Alert 📢. “Second member of a family can be considered for a party ticket only if he or she has already put in at least five years of work in the party’s organisational work”. The rule is applicable to everyone in the Party.”

Twitter handle @bole_bharat, which identifies itself as a ‘Fan of Congress’, slammed NDTV by referring to it as a ‘propaganda factory’.

Many other Congress loyalists also followed suit. They took to the microblogging site Twitter to call out the media outlet for propagating fake news.

The Congress members clarified that Congress leader Ajay Maken, in his address to the media, at no point in time named the Gandhi family and that the rule is applicable to everyone in the Party.

As the Congress begins its three-day brainstorming session Nav Sankalp Shivir in Udaipur on Friday, the party announced that “major changes” are coming to the organisation, including 50% representation for persons under 50 at all levels, starting with the Congress Working Committee (CWC).