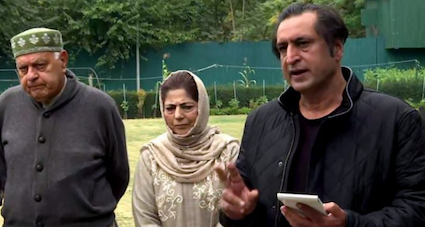 Peoples Conference (PC) President Sajad Lone hit out at the National Conference (NC) Farooq Abdullah, accusing him of rigging the Jammu and Kashmir polls in 1987.

Lone while addressing the gathering alleged that Farooq Abdullah rigged the 1987 polls in order to prevent the central government from losing control of the state’s politics.

He also asked the NC leadership to explain its U-turn on participation in the delimitation exercise.

“Thousands have been slapped with PSA. Maqbool Bhat and Afzal Guru were hanged because of PSA. If Farooq Abdullah hadn’t rigged the 1987 polls, the Muslim United Front would have won just 10 seats maximum,” he mentioned during the rally.

In a letter to Farooq Abdullah, PAGD, Lone said, “It is difficult for us to stay on. There has been a breach of trust between partners which we believe is beyond remedy. The majoritarian view in our party is that we should pull out of the alliance in an amicable manner rather than waiting for things to get messier. And I am confirming that we will no longer be a part of the PAGD alliance.”