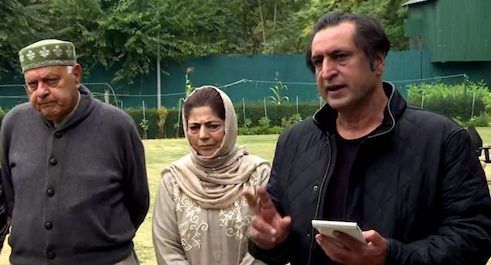 Just three months after it was formed, grandiose People’s Alliance for Gupkar Declaration (PAGD) lost its facade of unity as Sajad Lone walked away. Lone wrote a letter to alliance president Farooq Abdullah on Tuesday saying his party, People’s Conference (PC), would no longer be in the PAGD.

“It is difficult for us to stay on and pretend as if nothing has happened,” Lone wrote, saying an alliance like this can sustain only if parties are “willing to cede space”. He hit the nail on the head when he described how the alliance partners had worked to undermine each other.

“We fought against each other in Kashmir province, not against the perpetrators of August 5, 2019,” he said. Indeed, the basic reason for his walking away from the alliance was most parties putting “proxy candidates” against the official PAGD candidates.

According to some Kashmiri journalists, as many as 50 seats were lost by the official PAGD candidates to independents because of proxy candidates. That means that instead of 110 seats of the District Development Council (DDC), the PAGD could have emerged victorious in 160 seats!

Veteran Basharat Bukhari, who had left the PDP and joined the National Conference (NC) in December 2018, was the first to question the viability of PAGD and its agenda. He had said that the alliance should say openly what drove it and how it expected to achieve; what it talked of as its goals. If it had no specific plans in place to do so (to achieve its goals), even that should be clear to ordinary masses, he had said.

Lone was clear in what ailed the alliance from day one as he wrote: Trust between allying partners who have been rivals all along can be very elusive and extremely fragile. Earlier, his own party leaders, Imran Reza Ansari and Abdul Gani Vakil, had voiced their concerns about the backstabbing that had happened in the alliance.

After Mehbooba Mufti lost chief ministership in June 2018, Lone’s party had emerged as a choice destination for many of her People’s Democratic Party (PDP) legislators. Some others had joined Jammu Kashmir Apni Party (JKAP) headed by Altaf Bukhari who has often mocked the PAGD. During DDC elections, Bukhari had often said that the PAGD was extremely fragile and could not last.

Bukhari’s reading of the ground situation and rivalries within PAGD has now come true, with lightening speed. He had predicted that before the next legislative assembly elections, PAGD parties would be at each other’s throats. The unraveling of PAGD has happened much faster than many commentators believed.

National Conference Omar Abdullah was open about the fragility of PAGD, and his views were openly in variance with his own father and party president Farooq. He had time and again said in public that he did not have any unrealistic expectations of unity within PAGD. In contrast to his stance, Mehbooba had often said the PAGD could last because the goal of restoration of “special status of J&K” held all parties together.

If truth be told, her party, the PDP, had endured a most savage disintegration over the last couple of years. As such, she hoped to rebuild the party even as she ducked for cover behind the wafer thin facade of PAGD unity. It perhaps fooled nobody in Kashmir despite her pompous statements sometimes as is her wont.

In now seems most logical that Lone is the one who becomes the first to walk out of PAGD. After all, there was severe discontent in his party as most leaders felt that PC was shortchanged in allocation of seats as part of the alliance. In 2014, his party had contested against both the PDP and the NC and held its head high. Ironically, this time, as part of the alliance, it had got to contest too few seats, spreading discontent through rank and file.

It seems the BJP and the Apni Party, often called it’s B team, can have the last laugh as the PAGD comes apart.

The epitaph on the tombstone of PAGD right now reads: