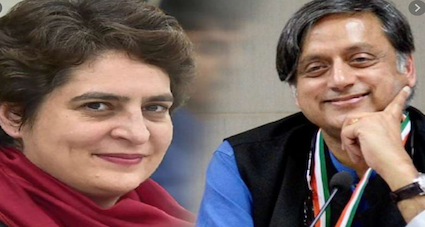 Congress and its leaders shamelessly pursue “Heads I win, Tails you lose” philosophy.

In the wake of WHO chief scientist Dr Soumya Swaminithan saying that India’s decision to ban vaccine exports could impact 91 nations, Shashi Tharoor today said the Indian government should hang its head in shame on stopping vaccine exports.

This when his party leaders, Rahul Gandhi and Priyanka Gandhi Vadra, have been sporting DP on their twitter account: Modiji who export vaccines that belong to Indian children.

“Not only did India fail to place bulk orders for its own citizens last year, it exported approximately 66.3 million doses by April 16 this year—touted as Vaccine Maitri, an attempt to help friendly nations while showcasing India as the world’s vaccine-manufacturing hub.

“Hit by the onset of the devastating second wave, New Delhi quickly banned these exports, redirecting supplies, instead, to states within the country and opening up the vaccination programme to priority age-groups. In the process dozens of nations depending on supplies through Gavi were left high and dry.”

This is Verbal Periodontitis: i.e. Verbal Disease of the Mouth.