Love Jihad: Nikita murder due to refusal to convert to Islam, says father 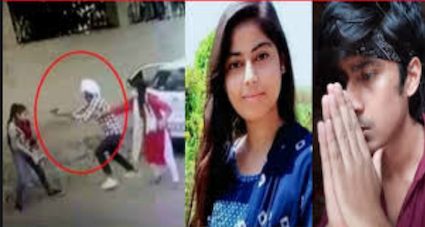 Nikita Tomar, a 21-year-old girl, was shot dead outside her college in Faridabad in October by Mohammad Tausif, her former classmate.

The family insisted that the reason behind Nikita’s murder was religious though a recent documentary by news portal The Quint claims that it had nothing to do with religion.

This has led to a sharp reaction from Nikita’s father Moolchand Tomar who says the documentary is a lie and reacted that his daughter’s murder was religiously motivated.

Even at the time of her murder, her family told the media that Tausif had kidnapped Nikita a year earlier and kept her confined for a day to try and convince her against her wishes to have nikah with him. He shot her dead when she turned down her proposal again.

A video of the cold-blooded killing was widely shared on the social media.

The Hindi media called the murder a case of ‘love jihad’. A couple of days after Nikita’s death, her family had put a banner outside their house saying Tausif killed Nikita for refusing to convert to Islam.

‘Nikita Tomar (1999-2020). Shot dead by Tousif in broad daylite for refusing to convert and marry him’, the banner read .

The 35-minute documentary called “Mission hate: Finding ‘Jihad’ in interfaith love’ has crossed a lakh views since its release three weeks ago. At 20 minutes mark, the reporter says that “Nikita was brutally killed by her stalker but since the accused was a Muslim and the girl a Hindu, the case was twisted to be one of ‘love jihad’”.

The video shows Nikita’s father as saying that though he had read in the newspaper that Tausif approached Nikita using a Hindu name for himself, he had not heard such a thing himself. “Madam, I don’t know what love jihad is. Only the experts can tell you better,” he is seen as saying in the video.

Moolchand Tomar now says the portal has “twisted” his words.

“I do not agree with what the documentary says about our case. I have still not moved on from the tragedy and it’s sad that my statement to the media given only two days after her death has been twisted and presented,” the response reads, adding that he is ready to talk to any journalist to present his version of the case in detail.

“Nikita Tomar is a warrior who has brought glory to women power by sacrificing her life fighting religious conversion,” the response further reads.

Moolchand Tomar has shared his criticism of the portrayal of his daughter’s case in the documentary with all the media publications he is in connected with.

It’s pertinent to mention here that the documentary, soon after showing Nikita Tomar’s case, plays down crimes on Hindus in Haryana’s notorious Mewat (now named Nuh) district. The reporter says while she was told that Mewat is a hub for ‘love jihad’ cases, she did not find a single case of forced conversion when she reached there. Instead, she found budding Hindutva vigilantes in the area.

The ground reality of Nuh, which is the only Muslim-majority district in Haryana, is however quite different.

In June, a retired district and sessions judge from Haryana belonging to the Dalit Hindu community, prepared a report on atrocities on Dalit Hindus by majority Muslims in Nuh and presented it to the government. “Aurangzeb-like brutal atrocities are being committed against Dalits in Mewat,” the report, based on testimonies of locals and documents, concluded.

In the 2011 census, 80 percent of its population was found to be Muslim.

(We acknowledge this news report from Swarajyamag with gratitude).