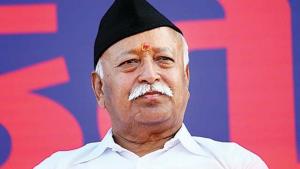 Before the Supreme Court begins the final hearings on the Ram Janmabhoomi case from December 5, India’s mainstream English media has begun pressing its foot on the propaganda gas pedal to portray the Hindu Right Wing in poor light.

Indian Express, as its front page lead story on Saturday, carried the comment of Rashtriya Swayamsevak Sangh (RSS) chief Mohan Bhagwat in Bengaluru that “Ram Mandir alone will be built, nothing else will be built.” The newspaper also published the outrage of Muslim law board’s hardliner Asaduddin Owaisi on the remark.

The Leftist media and academicians would look to spread lies and propaganda from now on against the idea of “Ram Mandir” as a violation of India’s secularist spirit and as a disregard to apex judiciary, Supreme Court.

So it’s time we firmly nail the lie of these presstitutes—both Lutyens Media and academicians of JNU kind—before they succeed in vitiating communal harmony and poisoning unsuspecting minds.

The litigation in Supreme Court was filed by parties in contention to the Allahabad High Court’s Ayodhya judgment on September 30, 2010 which ran into 8500 pages. (The entire judgment is available on the website of India’s National Integration Council: rjbm.nic.in).

The three-member High Court bench had then ruled that the “Babri Masjid had indeed been built on a religious Hindu site.“ The bench had further imposed respect for the verified Hindu convention of treating the site as Rama’s birthplace. (As an aside, even the 1989 Encyclopaedia Brittanica had mentioned Ayodhya Ramjanambhoomi as a Hindu temple destroyed in the name of first Mughal Emperor, Babur).

As can be imagined, the High Court bench had arrived at the judgment after years of diligence and painstaking research and cross-examination which validated the claims of Hindu Right Wing groups.

In 2002, High Court asked for Ground Penetrating Radar (GPR) to be used to confirm if the long-held tradition of a temple beneath the disputed Babri Masjid site was true. The verdict was overwhelmingly affirmative. High Court then asked the Archeological Survey of India (ASI) to verify the GPR claim with its own excavations.

The ASI report (ASI 2003) said: “Excavations at the disputed site of Ram Janmabhoomi-Babri Masjid was carried out by the ASI from March 12, 2003 to August 7, 2003. 82 trenches were excavated.” The ASI’s verdict was there are “remains which are distinctive features found associated with the temples of north India.”

It was a huge setback for “Ram Janmabhoomi” opponents. But more damning was the judicial word on the so-called academicians and experts for the fraud and wool they tried to pull over the eyes of the High Court bench.

The Allahabad High Court reprimanded the JNU “historians and academicians”, for their flawed research and vested opinions. One Professor Mandal, who had written a book against the Hindu claim, was found never to have even visited Ayodhya!!! These independent experts, historians and archaeologists had appeared on behalf of the Waqf Board.

One of the three judges, Justice Sudhir Agarwal, in particular, put these experts under judicial scrutiny. Most of these experts were made to depose twice.

These “historians”, before the ASI excavations, had said there was no temple beneath the mosque. Once the buried structure was under-earthed, they claimed it was a “mosque” or “stupa.”

They were then subjected to a grueling cross-examination by Justice Agarwal and his opinion runs over several pages in the final report. Damningly, these independent “historians and experts” were all shown to have connections. For example, one had done a PhD under the other, another had contributed an article to a book written by a witness.

These “historians” who had written signed articles and issued pamphlets, were found by the Honourable Judge to have an “ostrich-like attitude” to facts. The cookie crumbled quickly enough:

One Suvira Jaiswal deposed “whatever knowledge I gained with respect to disputed site is based on newspaper reports or what others (experts) told !!!”

Supriya Verma, another expert who challenged the ASI excavations, had not read the GPR survey report that led the court to order an excavation. Verma and Jaya Menon had alleged that the pillar bases at the excavation site had been planted but HC found their claim to be false. Verma had done her PhD under another expert Shereen Ratnagar who had written the “introduction” to the book of another expert Professor Mandal, who as said hadn’t even visited Ayodhya! Shereen Ratngar indeed admitted she had no field experience.

Justice Agarwal noted that opinions had been offered without proper investigation, research or study in the subject. The judge said he was “startled and puzzled” by contradictory statements. He referred to signed statements issued by experts and noted that “instead of helping in making a cordial atmosphere, it tends to create more complications, conflict and controversy.”

So mark out reports on Ayodhya issue in Lutyens Media from now on. Note down these reporters and authors who would flood you with reams of columns. Make a scrap of their lies, distortions and propaganda. For it sure is going to dominate your newspapers like Rohingya Muslims did not long ago.