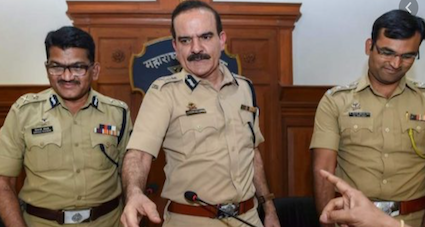 Sensationally, Param Bir Singh’s letter claims that the chief minister Uddhav Thackeray had been informed of Maharashtra home minister’s misdeeds in person by him in mid-March.

“At one of the briefing sessions in the wake of the Antilia incident held in mid-March 2021 when I was called late evening at Varsha to brief you, I had pointed out several misdeeds and malpractices being indulged into by the Hon’ble Home Minister. I have similarly briefed the Hon’ble Deputy Chief Minister, Maharsahtra, the President of the Nationalist Congress Party, Shri Sharad Pawar and other senior Ministers also about the misdeeds and malpractices. On my briefings, I noticed that some of the Ministers were already aware about some aspects mentioned by me to them.”

The letter details the alleged demand by Deshmukh.

“Vaze came to my office the same day and informed me of the above. I was shocked with the above discussion and was mulling over how to deal with the situation.”

The letter details a chat which Param Bir Singh had with an ACP (Sanjay Patil) and its details are incorporated in this letter to the chief minister. The chat is claimed to be on March 16.

The former Mumbai police commissioner claims in his letter that the home minister had regularly been bypassing him and calling his officers with “collection demands” among other things. “These corrupt malpractices have been brought to my notice by my officers,” Param Bir Singh says in the letter.

The letter also touches upon the death of Mohan Delkar, MP, Dadra and Nagar Haveli.

“A suicide note was found in the course of investigation. The said suicide note blamed senior officials of Dadra & Nagar Haveli and the trouble inflicted by them on Shri Delkar being the cause of suicide.

“However, from day one, the honourable home minister desired a case of abetment of suicide to be registered at Mumbai.”

“Due to my resistance, the Hon’ble Home Minister was unhappy with me as the political mileage desired to be derived from the registration of the abetment of suicide case in Mumbai in the death of Shri Mohan Delkar, Member of Parliament against senior officials of Dadra & Nagar Haveli was not being achieved.”

“It is not out of place to mention that there is no iota of material or evidence – far from proof – found against me or even imputed against me. Except for conjectures, surmises and pure speculation, no detail of any sort against me has been noticed by anybody. The call records and phone data of Shri Sachin Vaze be examined to ascertain the truth of the allegations qua me and for the truth to emerge insofar as his association with political functionaries is concerned.”