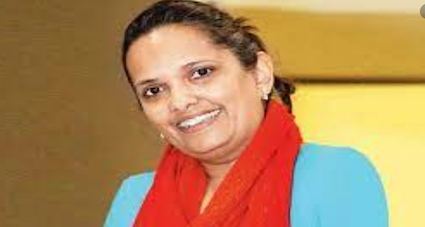 The great-granddaughter of Mahatma Gandhi, Ashish Lata Ramgobin, has been jailed for seven years in a six-million rand (Rs 3.22 crore) fraud and forgery case by a  South African commercial crime court in Durban.

The 56-year-old Ramgobin who describes herself as “an activist with a focus on environmental, societal and political interests” was accused of defrauding businessman SR Maharaj in 2015 after he advanced Rs 6.2 million to her for allegedly clearing import and customs duties for a non-existent consignment from India. He was promised a share of profits.

Brigadier Hangwani Mulaudzi of the National Prosecuting Authority (NPA) said that Ramgobin forged the invoices and had convinced her investor that three containers were shipped from India.

NPA spokesperson Natasha Kara said, “Lata Ramgobin said [to Maharaj] she was experiencing financial difficulties to pay for import costs and customs and she needed the money to clear the goods at the harbour.”

“She told him [Maharaj] that she needed R6.2 million. To convince him, she showed him what she claimed was a signed purchase order for the goods. Later that month, she sent him what seemed to be a NetCare invoice and delivery note as proof that the goods were delivered and payment was imminent,” she added further.

She even sent him confirmation from NetCare’s bank account that payment had been made. As Ramgobin had good family credentials and NetCare documents, Maharaj fell for the fraud and entered into a written agreement with her for the loan. However, he later realized that the documents were fake and filed a complaint against her.