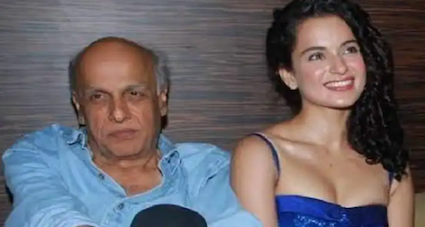 On Sunday (September 4), actress Kangana Ranaut shared a video clip of film director Mahesh Bhatt, questioning him over his ‘real name’ and accusing him of inciting violence.

In an undated video, Bhatt was heard as saying, “What I have understood by reading Islam is that a scared man (Dara hua aadmi) cannot be a Muslim. Wherever there is fear, there is no Islam. And where there is Islam, there is no fear.”

“Wherever there is darkness, there is no light. And where there is light, there is no darkness,” he continued. The veteran director then read out a hadith, shared with him by Maulana Mahmood Madani.

He said, “The Islamic hadith says that you must help your brother in all cases, irrespective of whether he is oppressed (mazlum) or cruel (zalim). This hadith must be recited before George Bush (US President) and Narendra Modi(the then Gujarat Chief Minister).”

“Why are you two committing atrocities on the adherents of a religion (Islam) which espouses peace and tolerance?,” he was seen whitewashing crimes committed by Islamists. Furthermore, Mahesh Bhatt claimed that the world’s greatest terrorist lives in the White House and not the mountains of Afghanistan (referring to Al-Qaeda).

In an interview with Republic TV in July 2020, Kangana Ranaut said when she was offered a film named ‘Dhokha’, which was about a suicide bomber. Reportedly, she felt uncomfortable as the film glorified the bomber.

Though Kangana was only 18 years old at that time, she knew it was not right to portray the role of a suicide bomber to avenge torture. She said Mahesh Bhatt yelled and charged at her but was saved by his daughter Pooja Bhatt.

She had also urged the Mumbai police to question the Bhatts in connection to the unnatural death of Shushant Singh Rajput. She added, “What was Mahesh Bhatt doing between Rhea and him? Everyone wants to know. Why is Mumbai Police not calling Mahesh Bhatt for questioning?”

India may continue to buy Russia's fuel at market value, including above the G7-imposed price cap mechanism, under the condition that it steers clear...

How Russia would combat the price cap on its oil by the West?