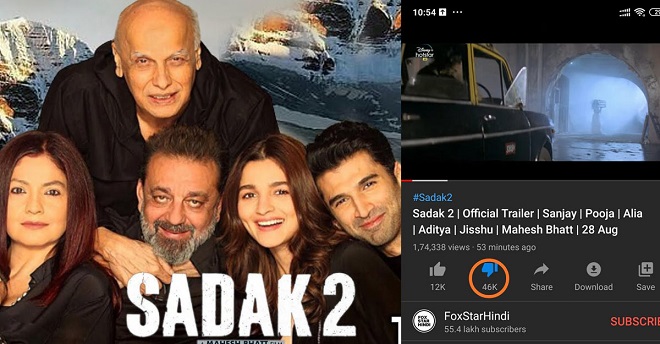 The headwind against a few Bollywood biggies in the wake of Sushant Singh Rajput’s death is stunning if the release of trailer of Sadak-2 is anything to go by.

The trailer of the film which stars Alia Bhatt, along with Sanjay Dutt and Aditya Roy Kapur has received nearly 2 million dislikes within a few hours of it being uploaded on YouTube. The people who have liked the trailer is just over a lakh.

A few comments of the viewers below the trailer read thus: “This trailer is going to become the most unliked trailer in YouTube history.” “Almost 2 million dislikes in eight hours. Our target is 20 millions dislike.” “Let’s make a record of world’s most disliked trailer.”

In the wake of Rajput’s death, which has saddened the nation and kept millions inflamed, the initial ire was against Karan Johar and his Dharma productions and then clips began emerging in social media about Shahrukh Khan and Alia Bhatt ridiculing the young star from Bihar in public glare.

It was alleged that Sushant was left high and dry by these machinations and in depression he took his life.

The story has now completely turned on its head after the young star’s father accused his son’s girlfriend, Rhea Chakraborty and her family, of pushing Rajput beyond the edge.

Even though the focus has shifted away from Dharma Productions and other Bollywood characters, it seems people’s anger against this set hasn’t abated a bit.

The film Sadak 2 releases on Disney Hotstar VIP on August 28.

The film has been made by Mahesh Bhatt and produced by his brother, Mukesh Bhatt under the banner, Vishesh Films. The film is the sequel to the 1991 film, Sadak which also had starred Sanjay Dutt.